Current and historic 30-year normals calculations are updated every ten years. This page reviews the most current normals, how normals are calculated, and more information.

The Snow Survey and Water Supply Forecasting (SSWSF) normals are site-specific measures of central tendency (either the median or average) for a data type, such as snow water equivalent (SWE). The statistics are calculated over a 30-year period and updated each decade, in agreement with World Meteorological Organization (WMO) standards. This 30-year reference period was chosen to characterize the current hydroclimatology at each station. The most recent medians and averages have been updated to include data for the water years 1991-2020. The National Water and Climate Center (NWCC) also provides medians and averages for the 1981-2010 and 1971-2000 reference periods for stations with sufficient data. The normals available from the NWCC include the median and average for SWE, snow depth (snow courses only), precipitation, volumetric streamflow, and reservoir storage. Values are calculated from data collected by NRCS-managed stations and external agencies such as the U.S. Geological Survey (USGS), National Weather Service (NWS), state agencies, and private organizations. Normals are calculated for various durations including daily, month-to-date, semi-monthly, monthly, seasonal, and annual based on the data type. 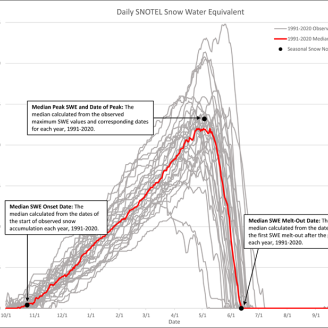 Transition to Median For the 1991-2020 reference period, the median is the official NRCS normal when conveying information about current snowpack, precipitation, and water supply conditions. The median was previously used as the official 1981-2010 normal for SWE and some streamflow forecast points, but the average was used for other data types. Setting the official normal to the median provides consistency across data types and stations. Viewing the 30-year average may be preferable over the median in some instances, therefore, both the average and the median are available in most NRCS reports and products.

New Seasonal Snowpack Statistics A new suite of statistics for automated snow monitoring stations are available to provide information about normal seasonal snowpack characteristics. These new seasonal statistics include medians and averages for the SWE onset date and melt-out date, as well as the median and average maximum seasonal SWE value (Peak SWE) and date of Peak SWE. The method for calculating the peak SWE has also changed; more on this change is detailed under Differences From Previous Normals.

The new seasonal snow normals can be viewed with the SNOTEL Snowpack Timing Update Report. However, these statistics may not be available for all sites with daily SWE normals. The seasonal snowpack statistics are not calculated for locations characterized by an intermittent seasonal snowpack because these sites may have multiple SWE onset dates, peaks, and melt-out dates on a given year. 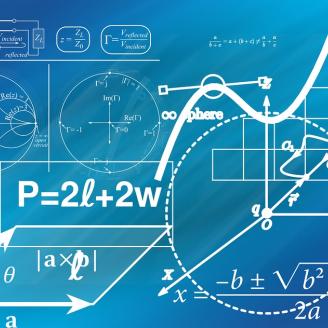 All NRCS SNOTEL and snow course data undergo a rigorous quality review process to ensure the highest data integrity for normals calculations. The quality of the data from external agencies used to calculate normals for cooperator snow sites, streamflow volumes, and reservoir storage vary by agency. The NRCS only performs cursory quality control on data from outside entities.

Averages and medians are calculated using only observations occurring during the 1991-2020 period. No estimation or smoothing methods are applied to fill in data gaps or short records. All stations must have a minimum of 10 years available to create a normal. For sites with significant disturbance, such as a fire, a double mass analysis is used to determine if data observations have been affected by altered site characteristics. If so, the normal may be created from the shortened period of record using only post-disturbance data. The number of years with data available for each normal calculation are available in many NWCC reports. This metric indicates whether each station has captured the full range of hydroclimate variability during the 1991-2020 reference period.

Differences Between Current and Previous Normals 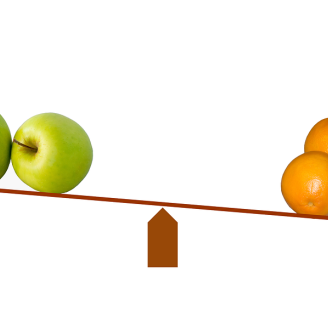 Differences Between Current and Previous Normals

The 1991-2020 normals update may result in a change to the central tendencies at a particular site compared to the values for 1981-2010. A shift in the normals may occur because the underlying data used to compute the statistics are not the same between the two 30-year periods. Updated calculation methods for 1991-2020 may also contribute to the difference between current and previous normals. Therefore, caution is recommended when making inferences from comparisons between the 1991-2020, 1981-2010, and 1971-2000 normals. The following subsections provide details on the different calculation methods between NRCS normals for each reference period.

Data Estimation
1981-2010 normals for SNOTEL sites and snow courses with less than 20 years of data were created using estimation methods. For SNOTEL sites, a ratio adjustment was applied to the normal of a short record station using the normal from a longer record station. For snow courses, cross-correlation was used to estimate data for missing years. Calculations for 1991-2020 normals do not use any estimation techniques. Only observed data are used to compute the normals to maintain consistency across all data types.

Smoothing
A seven day smoothing algorithm was applied to the 1981-2010 daily SNOTEL SWE average and median. 1991-2020 normals are not smoothed for any data type or duration. The lack of smoothing may result in day-to-day fluctuations in the time series of daily normals, but the normal value for a given day will be the true average or median of the data observations for that day.

Serial Completeness
The 1981-2010 normals required serially complete data for daily normals. This rule resulted in an omission of an entire year from the normal calculations for a site if any data from that year were missing. The 1991-2020 normals do not require this serial completeness for a year to be included in the average and median calculations. As a result, the number of observations used in a series of normals may vary. For example, a SNOTEL site may have had a malfunctioning SWE sensor for a two-week period during February 1991. This site would have 30 years available for most daily SWE normals, but only 29 years available during the two-week period in February. This change in the number of observations can result in variability in the time series of the daily (or other duration) normals, but it allows for the inclusion of potentially significant data that would otherwise be omitted.

Peak SWE Calculations
The method for calculating peak SWE normals is different for 1991-2020 in some applications, such as the daily SNOTEL Snowpack Update Report. For 1981-2010 normals, the peak SWE was derived in these reports as the maximum value from the set of daily SWE medians. The peak SWE date was the date corresponding to this maximum. For the 1991-2020 normals, the seasonal peak SWE and corresponding date are determined each year available during the reference period. The average and median are then calculated for this subset of the seasonal peaks. The method for 1991-2020 provides a more accurate depiction of the normal seasonal peak SWE. 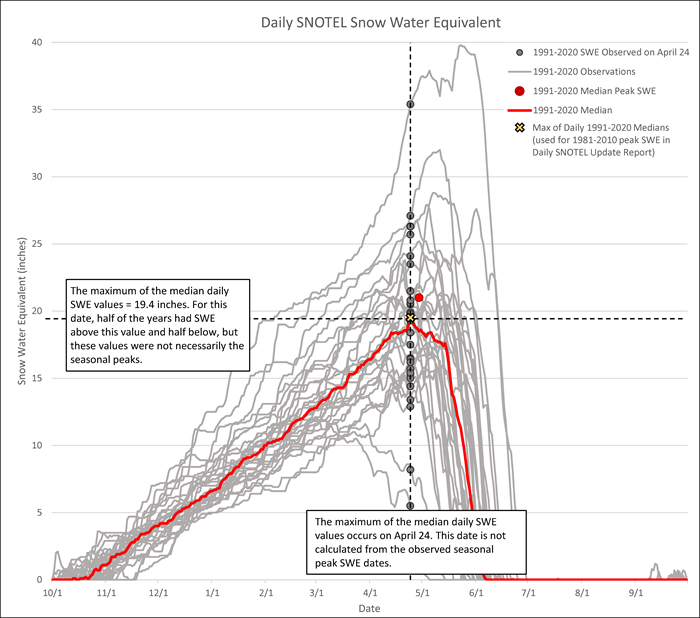 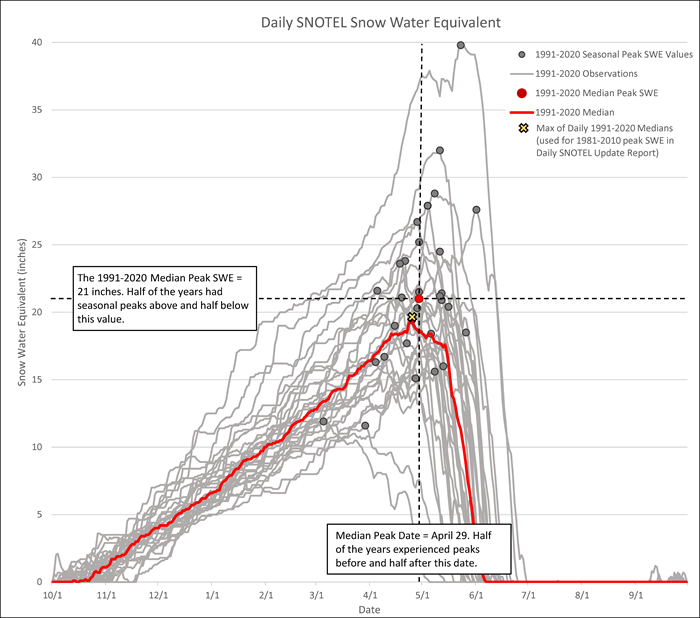 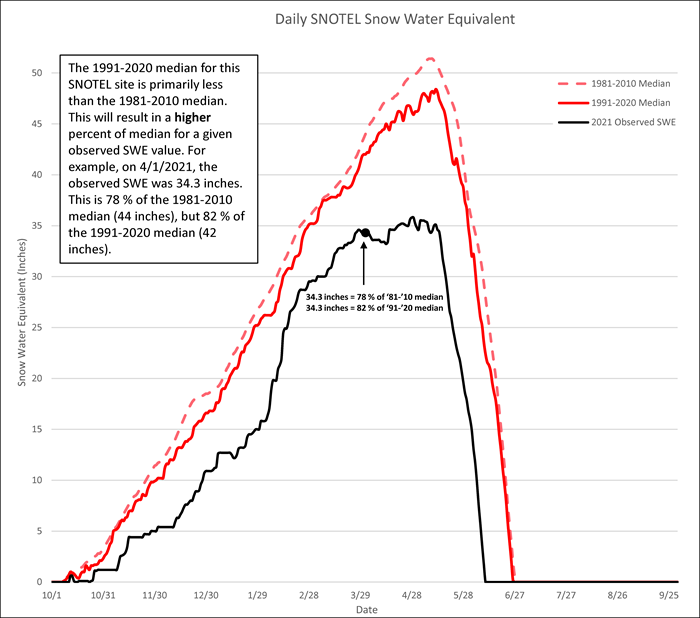 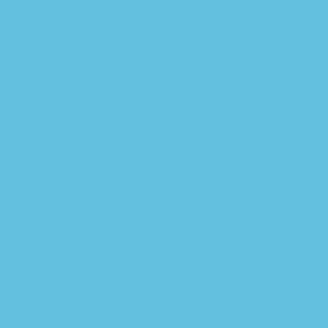 The median is the middle point for a range of observations, and it may differ from the average for the same dataset. Because the median is the center of a dataset, it may provide a better indicator than the average of the true central tendency for a range of observations. The median is less affected than the average by outliers, or large hydroclimatic events that can skew the distribution of the observations. Many stations collecting hydroclimatic data are prone to these extreme events, where a few high years can impart a large influence on the 30-year average. In these cases, the median is often smaller than the average and will still remain the center of the dataset, or the point at which half of the years have been greater, and half have been less during the reference period. The median also remains a valid measure of central tendency for datasets that have not experienced these extreme events. Using the median universally as the official normal will provide consistency across data types and stations, and should help reduce confusion when determining the appropriate reference statistic. 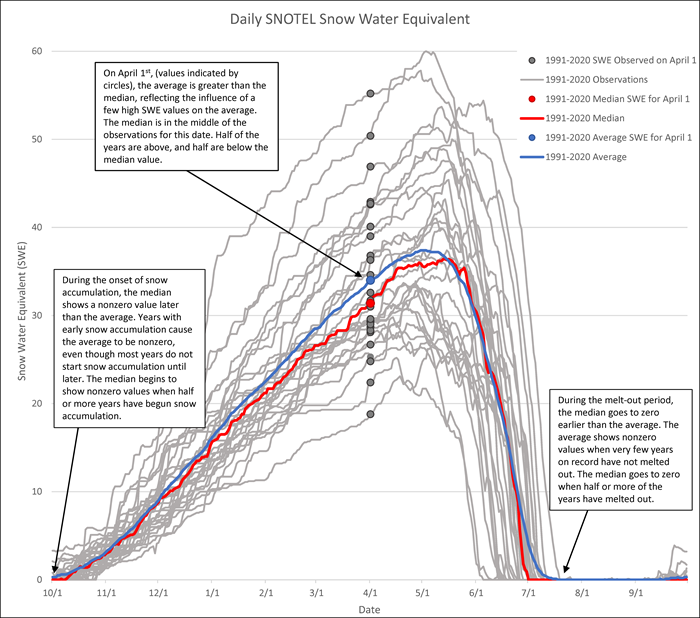 The daily average time series tends to follow a more uniform pattern than the daily medians. The lack of smoothing and presence of serial incomplete data can amplify fluctuations in the median from day-to-day, particularly for daily SWE medians. For example, intermittent decreases in the median SWE time series prior to the peak are often an accurate characterization of the seasonal accumulation patterns at the particular site. However, this can make interpretation of the percent of median from day-to-day less intuitive because the percentages may have considerable fluctuations when the observed SWE is unchanging. This behavior may be more pronounced at some sites, particularly those with intermittent snow characteristics or sites that typically experience temporary melt periods prior to the seasonal peak.

Variations in Percent of Median for Stable Daily SWE 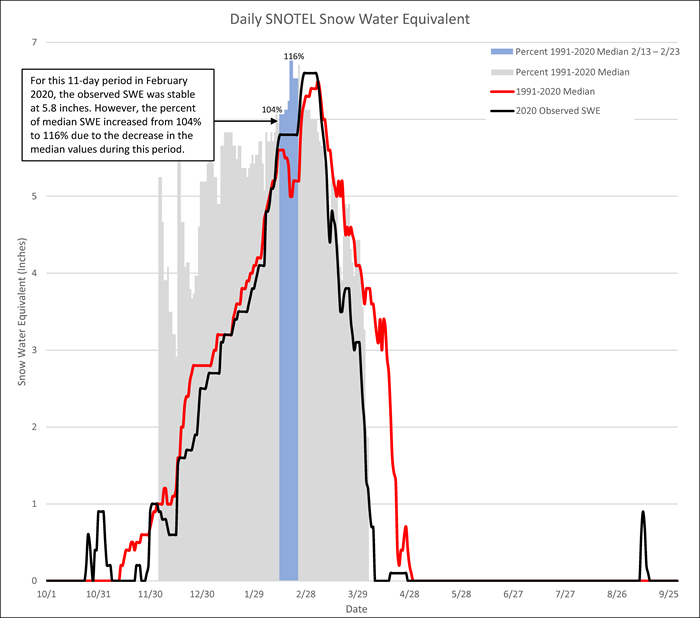 The Interactive Map provides access to charts comparing the official normals used for 1981-2010 with the official 1991-2020 normals. At each of the links below, click on a station or basin of interest, and in the resulting popup follow the link labeled ‘1991-2020 vs 1981-2010 Normals’. Comparisons for SWE and some streamflow locations will show 1981-2010 median and 1991-2020 median. All other comparison charts show the 1981-2010 average and 1991-2020 median. As noted above, caution is recommended when making inferences from comparisons between the two reference periods.