A state soil is a soil that has special significance to a particular state. Each state in the United States has selected a state soil, twenty of which have been legislatively established.

These “Official State Soils” share the same level of distinction as official state flowers and birds. Also, representative soils have been selected for the District of Columbia, Puerto Rico, and the Virgin Islands.

Areas with similar soils are grouped and labeled as soil series because their similar origins, chemical, and physical properties cause the soils to perform similarly for land use purposes. A soil series name generally is derived from a town or landmark in or near the area where the soil was first recognized. Each series consists of soils having major horizons that are similar in color, texture, structure, reaction, consistence, mineral and chemical composition, and arrangement in the soil profile. A soil profile is the sequence of natural layers, or horizons, in a soil. It extends from the surface downward to unconsolidated material. Most soils have three major horizons, called the surface horizon, the subsoil, and the substratum. 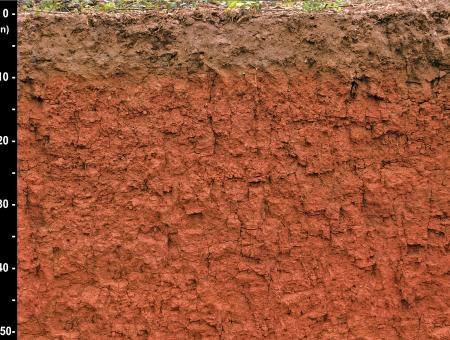 Factsheets are available for each state along with representative soils for the District of Columbia, Puerto Rico, and the Virgin Islands

These photos were taken by the Smithsonian Institution. If you would like to use these photos in a publication, please credit: United States Department of Agriculture, Natural Resources Conservation Service. 2006. Photo by Chip Clark, Smithsonian.

For additional information, please see the State Soil Booklets from the Soil Science Society of America.

Please contact us if you see something that needs to be updated, if you have any questions, or if you need accessibility assistance.