In 1935, the Natural Resources Conservation Service established a formal, cooperative Snow Survey and Water Supply Forecasting (SSWSF) Program to conduct snow surveys and develop accurate and reliable water supply forecasts for the western U.S. With the vast majority of water in the West coming from the melting of winter snowpack, data on snow provide information critical to water managers, agriculture, dam operations, recreationists, and business.

In the early days of the SSWSF Program, snow surveyors on skis or snowshoes manually measured snowpack along a series of remote, high-elevation snow courses. The invention of over-snow machines, such as snowmobiles, made travel to snow courses less challenging. Some years later, aerial markers were introduced, allowing for snow measurement using airplane flyovers. The Program currently measures more than 1,300 snow courses and aerial markers.

In 1977, the automated Snow Telemetry (SNOTEL) system was introduced. SNOTEL sites are designed to operate continuously and unattended for up to one year. Since its inception, the network has grown to include over 800 automated SNOTEL and 50 semi-automated SNOLITE data collection sites across the West. 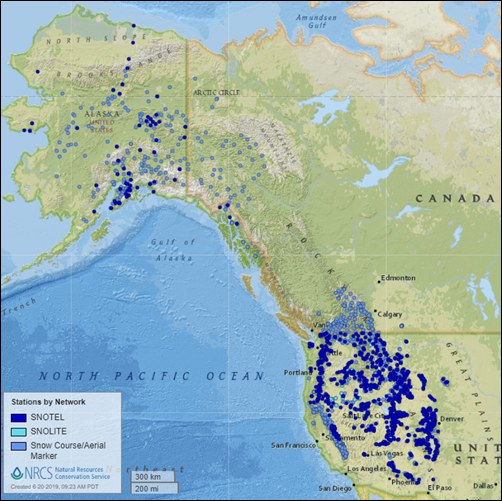