Here you will find information on local soils including Vermont's state soil, Tunbridge.

Botanists look at plant features, such as leaf shape and number of flower petals, to describe and classify plants. Whereas, soil scientists look at things like soil horizons (layers) and depth to bedrock to describe and classify soils. There is even a soil key (taxonomy) that allows one to key out a particular soil classification. A soil is defined as: a vertical section of the soil through all its horizons.

See the figure below for a visual depiction of Tunbridge Soil.

The Tunbridge series consists of loamy, well-drained soils that formed in Wisconsin-age glacial till. These soils are 20 to 40 inches deep over schist, gneiss, phyllite, or granite bedrock. They occur extensively in mountainous areas of Vermont, in all but one county.

Tunbridge soils are used mainly for woodland. White ash, American beech, white birch, yellow birch, hemlock, white pine, red spruce, red maple, and sugar maple are typical species. Sugar maple is especially important; Vermont produces the largest amount of maple syrup in the U.S. Some areas have been cleared and are used for hay and pasture. Recreational uses are common on these soils. They include trails for hiking, mountain biking, snowmobiling, and skiing.

In addition to having certain soil characteristics and typical land usage, a image of a "typical landscape" where the soil is found helps to complete the description. 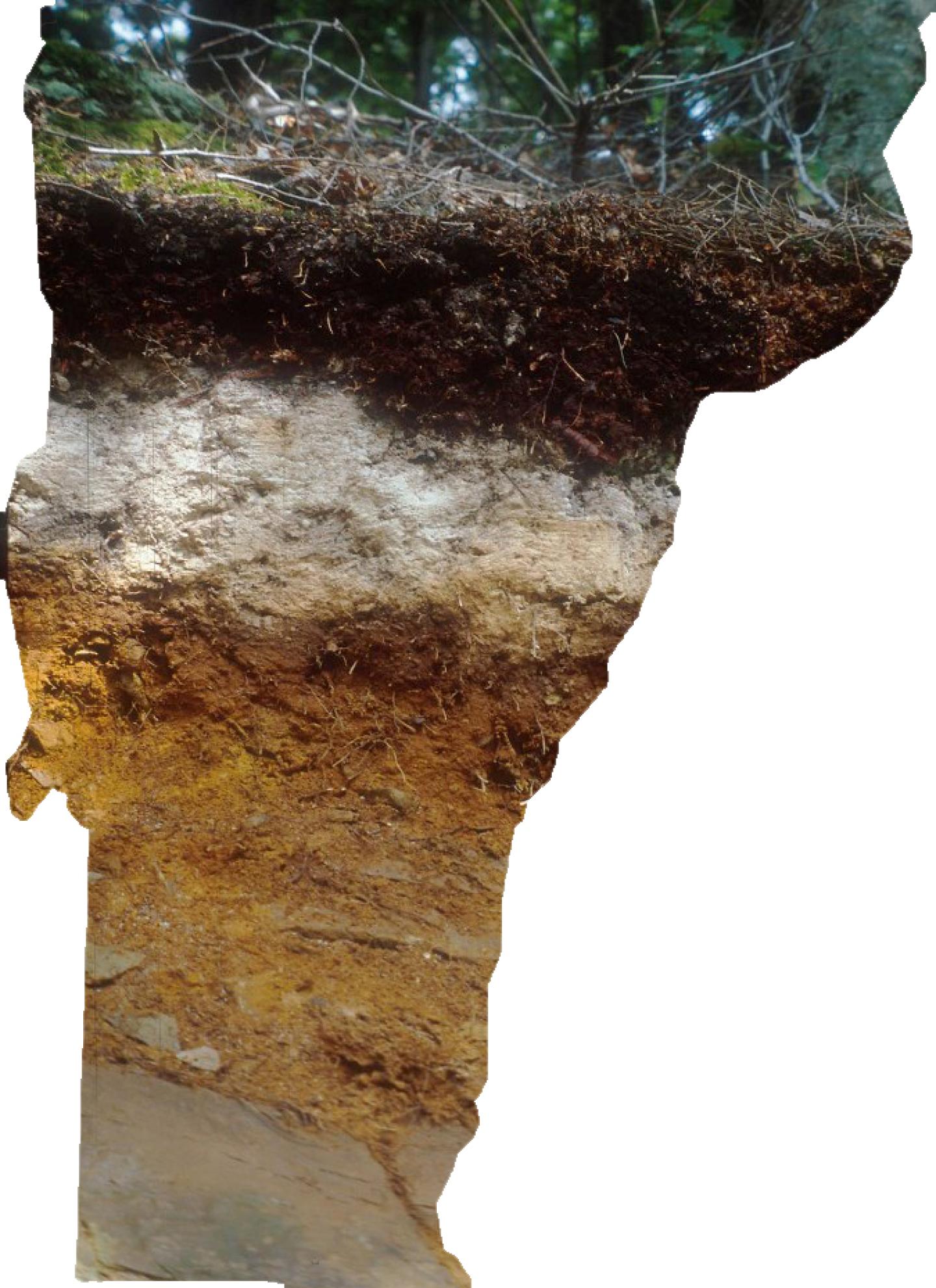 Soil series are often named for geographic places. For example, "Vergennes" clay is a predominant soil in the Champlain Valley and other parts of New England. Many geographic names in Vermont and throughout the US are derived from the white settler's adaptations of the original American Indian place names. Thus, there are a number of soil names that have Native American roots.

Native Americans were the first farmers in this country. Many of the crops we commonly consume, such as corn, squash and beans were introduced to the Colonial settlers by American Indians. The First Nation Tribes had a well developed understanding of the characteristics of productive farmland. Alluvial soils with loamy soil textures and good drainage were used for cultivation, even now they still hold artifacts of the original inhabitants of this land. The Abenaki Tribe, who occupied a large portion on Northern New England, has many ways of characterizing different soils in their language. Their system existed long before modern day soil scientists developed classification systems (download the article "The First Conservationists" at the bottom of the page to learn more).

The Agawam lived in the Connecticut River Valley near Springfield, MA. Agawam was the name of a Penacock village in northeastern Massachusetts.

Canandaigua was a Seneca Tribe village that was destroyed during the campaign by the American Army under General John Sullivan in 1779.  Canandaigua may have been derived from kanandarque which means the chosen spot.

The Abenaki name for Mount Monadnock in southeast New Hampshire is menonadenak, which means smooth mountain.

Taconic may have been derived from a Mohegan or Natick word which means wild forest or the Delaware word tatchan which means woodland.

Vermont Surveys Past and Present

NRCS soil survey began with the recognition during the Dust Bowl that we needed to take better care of our soil resource. A national soil mapping effort resulted as a reaction to this terrible man-made ecological disaster in the 1930's. Soil Survey mapping is the starting point for much of the current day technical assistance that NRCS provides. All 14 counties in Vermont have completed soil mapping. Soil survey data is available in digital format for the whole state.

Numerous interpretations are included along with the soil maps. The interpretive data includes a wide range of data - such as, ratings for highly erodible land and prime farmland. Today, the soil survey program continues to evolve, using the latest technology to improve the quality and consistency of soil maps. The original county-centric mapping of the past will be transformed by a physiographic region approach that will harmonize the data across the county.

Updating Soil Maps in the Lake Champlain Basin: NRCS is updating the soil mapping within selected areas of the Basin. The goal is to use new information and technologies to bring the soil survey for the Basin up to a consistent common standard. Currently, the soil survey in the area is made up of many different vintages and is in need of updating to improve accuracy, and therefore land use decisions. See the factsheet below to learn more.

The University of Vermont Extension recently released a presentation on soil carbon stocks in Vermont and the state of soil health in the state. The project was a collaborative effort UVM Extension, The Nature Conservancy of Vermont, the Gund Institute for Environment, and more. The project set out to establish a baseline of soil health indicators, carbon stocks, and associated ecosystem services in Vermont's agricultural landscapes, create standards for soil sampling across management types, give farmers contextualized information about soil health on their farms, support collaboration among the many organizations that work with producers towards soil health, and build skills and capacity for soil carbon assessments and measuring soil health. Below you will find the presentation in addition to the data from the project that has been graciously shared with Vermont NRCS.

In order to maintain eligibility for most USDA programs, producers must comply with the Highly Erodible Land Conservation (HELC), agreeing they will not:

The Natural Resources Conservation Service (NRCS) is responsible for providing program participants technical assistance and determinations to assist them in complying with the provisions.

The SSURGO user should be knowledgeable of the structure of the soil database and familiar with GIS technology.

There are three levels of digital soils data:

The majority of counties in Vermont use 1:20,000 mapping scale for SSURGO data. The minimum area mapped is, in general, about 3 acres.  This level of mapping is designed for use by farmers, landowners, watershed groups, towns, and county/regional/state natural resource planning agencies.  The data is available for download from the sites listed below.

To find all types of spatial data to download from VCGI, go to http://geodata.vermont.gov/

For soils data options from  this page, scroll down and find the icon called Geologic + Soils, and click on it.  On the resulting Vermont Open Geodata Portal web page, click in the Search window and type “soils”.

A direct link to Soils data specifically, from VCGI: http://geodata.vermont.gov/datasets?q=soils

These data layers are synchronized annually with the official Web Soil Survey data source, and include some common attributes such as map unit name, Prime Soil characteristics, and bedrock depth.  There are several download options – if you want the soils data for a particular county, click on that county in the map and follow instructions that pop up.

*Note: The "Top Twenty Table" included in the SSURGO attribute data. This is a condensed and easy to use single table, containing the most frequently used data attributes. On the VCGI site it can be found in http://geodata.vermont.gov/datasets?q=soils – scroll down to find VT Data – NRCS TOP20 soils attributes and documentation.  Click that title to download info.

This data is available at 1:24,000 scale. In Vermont the data were developed with the intended publication scale of 1:20,000. A "scale waiver" was permitted for many Vermont counties, to allow this non-standard scale and make soil data compatible across Vermont.

Soil surveys are an inventory of the soil resources that includes soil maps, data about soil properties and characteristics, and interpretations about soil suitability and limitations for land use and management. They were historically conducted on a county basis.  Soil map units often extended to political boundaries rather than natural features. To harmonize the soil survey data within physiographic regions, soil survey offices are now organized by MLRA. 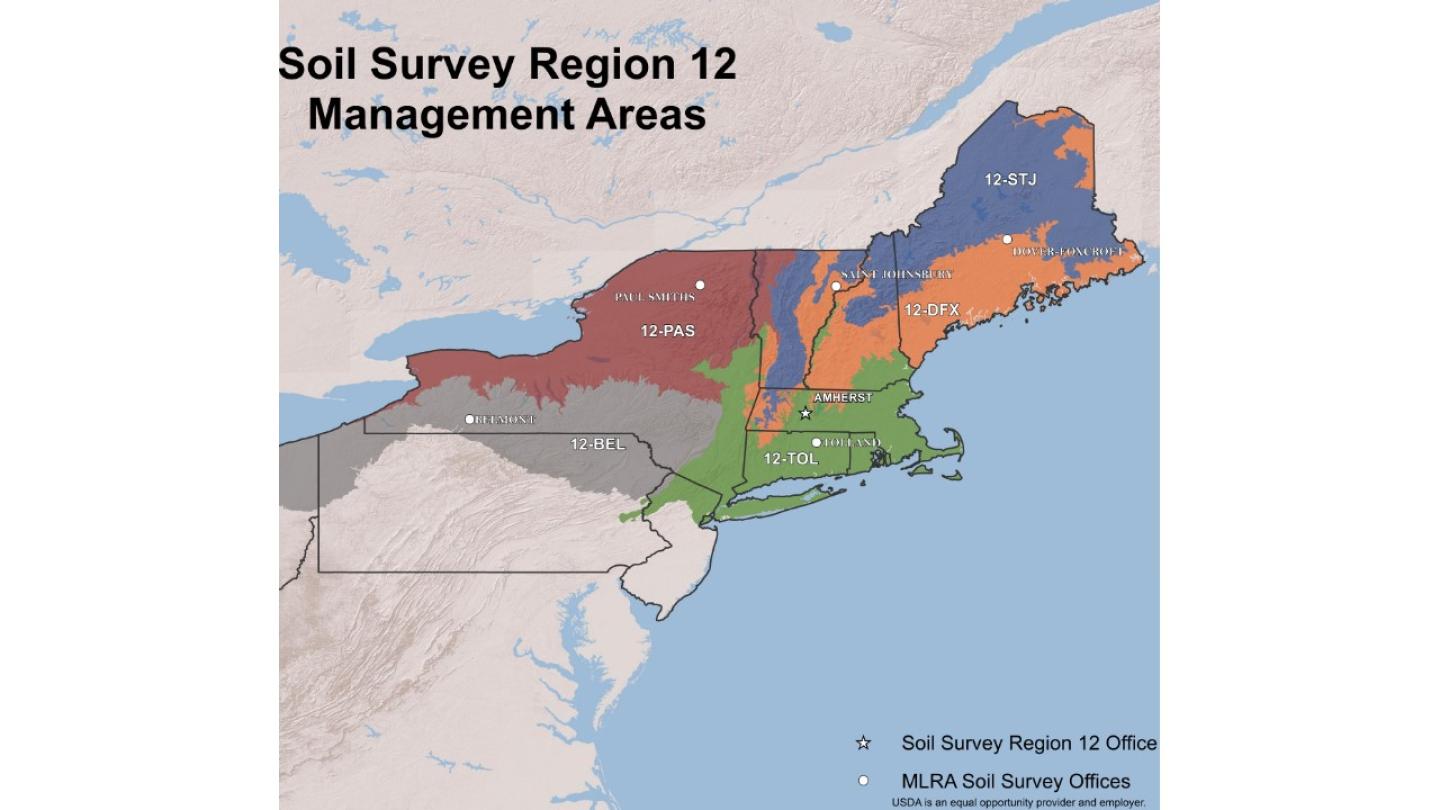