The database of the Kellogg Soil Survey Laboratory (KSSL), National Soil Survey Center, currently contains analytical data for more than 20,000 pedons of U.S. soils and about 1,100 pedons from other countries. Standard morphological pedon descriptions are available for about 15,000 of these pedons. Partial data for pedons currently being analyzed may be unavailable. Soil fertility measurements, such as those made by Agricultural Experiment Stations, were not made. Most of the data were obtained over the last 40 years. About 3/4 of the data is less than 20 years old. Analytical data for most of the pedons is fairly complete, according to the prevailing view of the research and characterization needs when the pedon was sampled. Generally, the kinds of analyses have increased over time.

Coverage is for all 50 states, Puerto Rico, Virgin Islands, Trust Territories, and some foreign nations.

The National Cooperative Soil Survey Soil Characterization Database is composed of the KSSL working computer files. It includes data that may or may not represent the central concept of a soil series or map unit and pedons sampled to bracket a range of soil properties within a series or a landscape. For research purposes, all such data are retained in the database. Users unfamiliar with a given soil may want to consult a knowledgeable soil scientist to determine how well the data represents a soil series. Furthermore, the database has not been edited to remove all of the erroneous or sometimes misleading data. Users are responsible for the assessment of the accuracy and applicability of the data. 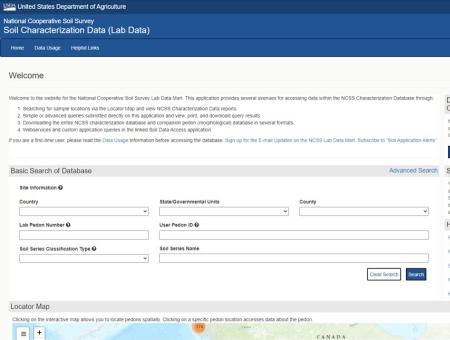