The program objectives are to promote the recovery of threatened and endangered species under the Endangered Species Act; improve plant and animal biodiversity; and enhance carbon sequestration.

In Pennsylvania, HFRP funding will be utilized to protect and improve critical habitat for the Indiana bat (Myotis sodalis), through the acquisition of conservation easements and/or cost share agreements supported with habitat improvement through the implementation of selected conservation practices and supporting activities. 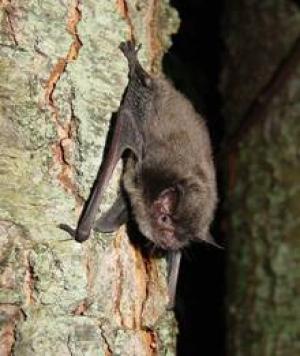 The Indiana bat, Myotis sodalis, is small (about 3 to 3.5 inches in length) and is grayish brown in color similar to the much more common little brown bat (Myotis lucifugus). In winter, Indiana bats hibernate in caves and abandoned mines, where winter temperatures are cooler – at lower temperatures, the bats’ metabolisms slow down, so they use less of their fat reserves as they hibernate. In the summer, the bats frequent wooded areas near streams, roosting in crevices under tree bark or in hollow trees. Trees that receive direct sunlight during the day are preferred by these bats.

The Indiana bat is vulnerable to human disturbance of its roosting sites. Contamination of their food supply through the use of pesticides in agricultural areas and loss of summer habitat may also be contributing to the species' decline. Although more research is needed to understand the summer habitat requirements of the Indiana bat, it is known that they roost under the bark of mature trees or dead snags in forests. Increase of old growth forest acreage and forest contiguity, especially within several miles of hibernation sites, will likely improve prospects for this species.

Indiana bat populations have declined approximately 60 percent since monitoring began in the 1960s. Currently, the species is protected under the US Endangered Species Act.

(Photo and Information courtesy of the USFWS)

Who is Eligible to Apply?

Owners of private forest land are eligible to enroll in the Healthy Forests Reserve Program in Pennsylvania. The land must be capable of supporting Indiana bat habitat, and must be located in a county where known Indiana bat hibernacula and maternity colonies exist (see the Application Information section below for a listing of applicable counties).

Easement applicants must be able to convey clear title to the land. In addition, the landowner must provide the following documentation so NRCS can determine if the landowner is eligible to participate in the program:

1) Copy of deed or other documentation showing that the landowner has title to the land.

HFRP contracts are awarded to applicants with the highest rankings until funds are exhausted.

Easement value will be determined by completing an appraisal for easement property.

HFRP practices were developed by NRCS in cooperation with the PA NRCS HFRP partners. The following is a list of some HFRP practices:
• Early Successional Habitat Management
• Riparian Forest Buffer
• Tree/Shrub Establishment
• Restoration of Rare and Declining Habitats
• Forest Stand Improvement
• Use Exclusion

The HFRP ranking criteria for Pennsylvania was developed in consultation with the State Technical Committee and Federal, State and local wildlife agencies and organizations. The HFRP ranking includes criteria on proximity to bat hibernacula, size and fragmentation of offered acres, connectivity, proximity to riparian areas, biodiversity, invasive species, and availability of snags. Applications are evaluated and awarded points utilizing the ranking criteria.