Comparing Virginia State University’s “high tech high tunnel” to an ordinary hoop house is a little like comparing a bicycle to the Batmobile. This one-of-a-kind structure at Randolph Farm is showing Virginia farmers just what’s possible with this fairly familiar farm implement.

“Our one rule in designing it,” said William Crutchfield, director of VSU’s Small Farm Outreach program, “is that any bell or whistle anyone wanted was included. We don’t have a wide-screen TV in there, but we could power it up if we did.”

Like most visionary ideas, this project took a lot of time, effort and coordination before bearing fruit. Former VSU College of Agriculture Dean Jewel Bronaugh was one of the first to see the value of the concept. She gave Crutchfield the green light to develop a proposal for the unique demonstration project in 2017. Funding was one of many hurdles the team encountered in designing the prototype.

USDA’s Natural Resources Conservation Service was one of several partners making investments in this showcase for next-level high tunnel production. The proposal was a perfect fit for the agency's Conservation Innovation Grant program (CIG), which is designed to evaluate and accelerate adoption of new approaches to natural resource protection.

Nothing like it had ever been built anywhere else, so the team wasn’t exactly surprised when members experienced setbacks and challenges soon after construction began in April of 2020. The first delays were COVID-related. Then, a fire melted several plastic roof and side panels and the first activation resulted in multiple system failures.

“It took almost a year and a half to build,” Crutchfield said. “When you’re doing something new, you can expect the unexpected.”

The list of “extras and options” for this 21st-century tunnel includes an adjacent solar array and wind turbine used to power everything inside, from irrigation to lighting to climate control. The structure can be heated on cold days and ventilated on hot ones using electric motors that raise and lower the side panels. Gutters feed two giant cisterns that capture rainwater coming off the roof for reuse and automated watering settings can be adjusted based on the temperature and humidity levels inside.

Visitors walking through the 2,880-square foot structure can see the future of high tunnel production. While Crutchfield doesn’t expect to see Virginia farmers building their own versions of this $750,000 project, he does hope they will be inspired to consider smaller enhancements.

“People walk through it and say, ‘This is so great, but I could never afford it,’” he said. “I tell them. ‘No, but you may be able to afford to buy the pieces of it that would help you the most on your farm.’”

“That’s exactly what we’ve always liked about the project,” said Dr. Edwin Martinez Martinez, NRCS’ state conservationist for Virginia. “It’s aspirational. You can add one feature now and maybe put another on a ‘to-do’ list for later. The idea is to expand people’s ideas of what can be done with a high tunnel.”

While the rainwater recapturing system tends to spark the most interest from visiting farmers, Crutchfield also sees the tunnel as an advertisement for the use of wind and solar power in agriculture.

“It can open small farmers’ eyes to the possibilities of solar power,” Crutchfield said. “Maybe it’s not practical for an individual farmer to build an array like ours but one solar panel can often power a single system, or even power security lights that make it safe to walk to or go inside the tunnel in the dark.”

The tunnel is designed to operate entirely “off the grid,” as the 24-panel solar array and the wind turbine charge storage batteries that power every function. A generator has also been installed for use if these power sources are unavailable. Tunnel manager Grace Summers is careful to add that the additional features don’t change the underlying function of the structure.

“The goal is the same as with any high tunnel,” Summers said. “You can use it to extend your growing season and to get produce to market at favorable times when whatever you’re growing might be in short supply. I’ve been around high tunnels for more than 15 years and this one can do just about everything you’d ever want it to do.”

The high tunnel has occasionally challenged the VSU team’s ability to adapt in managing the system. Remote controls developed after a total systems failure on a holiday break now permit Crutchfield and Summers to monitor and change settings using their cell phones.

As tours continue, Crutchfield is also aware that the VSU’s tunnel’s one-of-a-kind status may eventually be lost.

“We’ve had visitors from other colleges that have shown interest in building something a lot like it,” he said. “That’s the most likely possibility for building another one. It’s exciting to think about that happening. Maybe they’ll think of something we left out.” 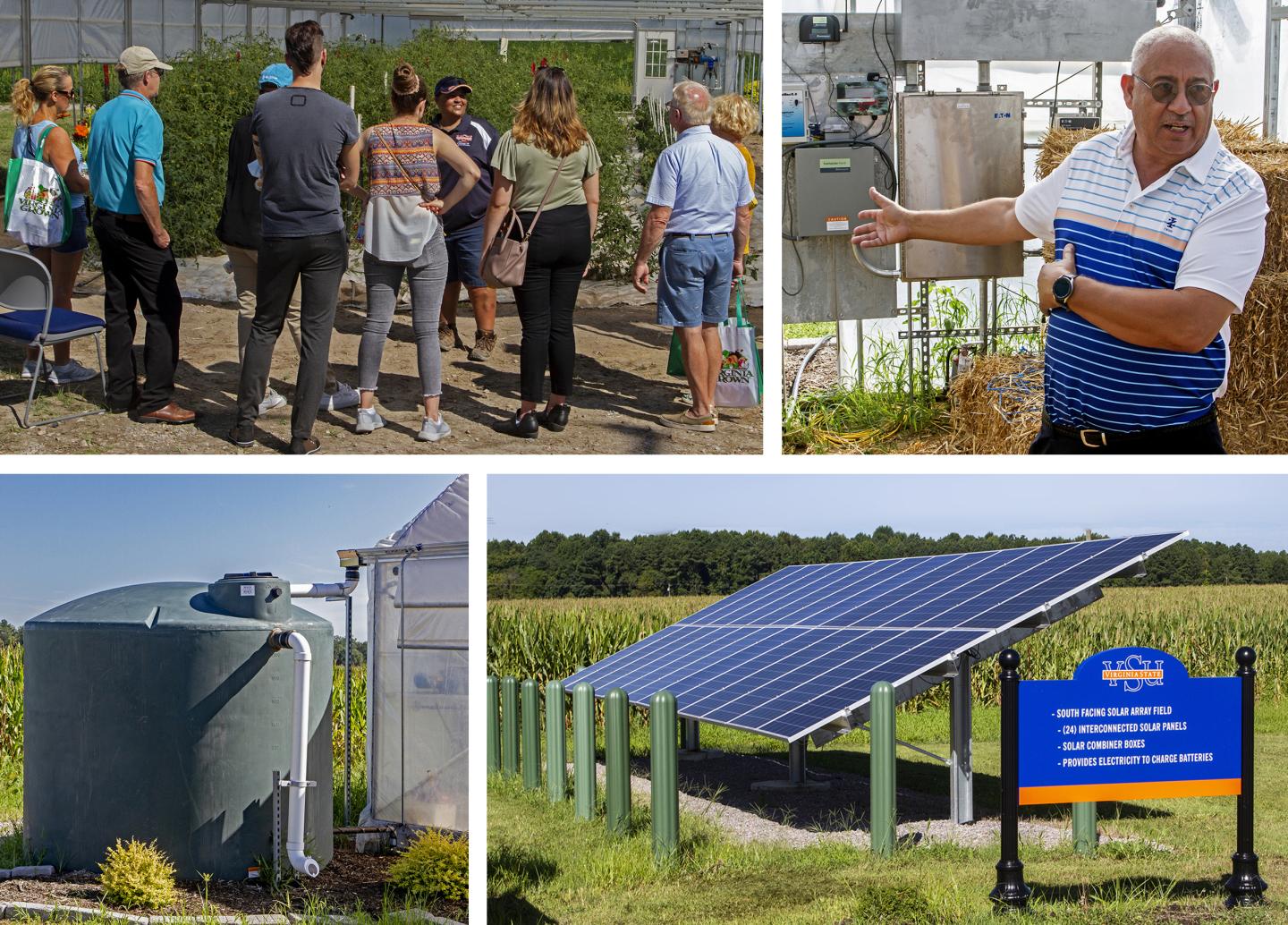