Hurricane Harvey made landfall in Texas on August 25, 2017. The deadly storm dumped record rainfall into Harris County waterways, resulting in disastrous flooding that led to sinkholes, bank erosion, failed concrete, collapsed outfall pipes, as well as the destruction of trees, bushes and grasses.

Looking across the soft grassy hill with its generous display of young blossoming trees and a sturdy cement wall sloping down to the channel below, one would never guess this was a scene of chaos and devastation just a few short years ago. 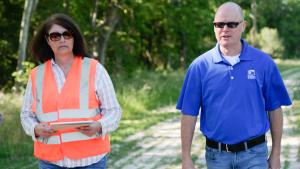 “I tell anyone who will listen–because it comes as a surprise–that the USDA - Natural Resources Conservation Service was the funding source for more than 80 percent of the repairs the Harris County Flood Control District made as a result of damages from Hurricane Harvey,” says District Director of Operations, Alan Black.

Standing in front of a portion of the, now restored, Oyster Creek channel, Black describes the integral role NRCS played in responding to and repairing the massive widespread destruction left in the wake of the 2017 Category 4 hurricane.

Hurricane Harvey, which made landfall in Texas on August 25, 2017, is blamed for 103 direct and indirect deaths. The deadly storm dumped record rainfall into Harris County waterways, resulting in disastrous flooding that led to sinkholes, bank erosion, failed concrete, collapsed outfall pipes, as well as the destruction of countless trees, bushes, and grasses. Approximately 14,000 commercial structures and businesses were flooded, resulting in varying degrees of damage.

Fiscally, Harvey ranks as the second-most costly hurricane to hit the U.S. mainland since 1900, causing nearly $125 billion in damages.

“Our Harvey repairs, at least from the standpoint of the NRCS, are complete,” Black says, explaining there are some additional repairs left to do in conjunction with the Federal Emergency Management Agency (FEMA).

Federal, state, and local agencies often operate on slightly different processes and schedules, including how they fund projects, resulting in a longer wait time to get approval of funds. According to Black, NRCS has a system in place involving little to no bottlenecks so far as obtaining necessary funds quickly, “Which is why I’m such a big cheerleader of the NRCS,” says Black.

“From Day 1 we worked with NRCS and were able to get funds moving to where we’ve now fully implemented the repairs all across the county, coming from their Emergency Watershed Protection (EWP) Program.”

To put things into perspective, during Hurricane Harvey, a total of 1 trillion gallons of water fell across Harris County over a four-day period. According to the District, this amount of water would cover Harris County’s 1,800 square miles with an average of 33 inches of water. Harris County typically receives an annual rainfall of about 50 inches per year. The damage to the county’s drainage infrastructure was unimaginable. 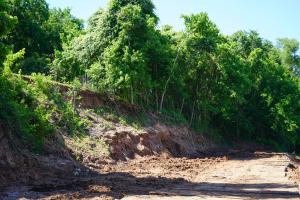 “When a disaster comes along and causes slope erosions, failures, pipes that get blown out from the storm – we work with NRCS and EWP to make those repairs to the natural infrastructure.”

According to Black, the NRCS has provided $13 million through the EWP Program to be used for drainage infrastructure repairs. “The EWP Program is integral to repair damaged channels to get them back up and running where they should be.”

“NRCS’s EWP is a federal program designed to assist local communities to recover after natural disasters,” explains Monica Duke, an agricultural engineer with the NRCS in the Huntsville Field Office.

Duke has encountered a lot of different projects throughout her 20-year career with NRCS.

“The aim is to provide technical and financial assistance to local communities within a particular watershed,” she says, explaining that in addition to helping community agencies, EWP also can assist an individual landowner to create a watershed easement. Duke understands how complex purchasing a floodplain easement can be, and the NRCS can assist with these complexities.

“Recovery begins with a local sponsor, which could be the city, the town, a Tribal organization, or a county,” she says, describing the process of NRCS working with a contractor as being simple to follow yet thorough.

“You have a pre-construction meeting to go over the materials needed to get started, followed by the plan of action like what’s involved with design, construction, and safety. NRCS is also available to answers questions during construction or inspection.”

“At the end, we require an as-built of the structure to make sure it was completed accordingly,” says Black.

Although the hurricane was over 4 years ago, the EWP program is still helping to provide financial assistance towards reconstruction.

Adam Wright, a project coordinator with the Fort Bend County Drainage District, has handled the Hurricane Harvey recovery effort from the start under the NRCS EWP Program. “We have two projects left to complete after Hurricane Harvey,” he says, explaining the sites are located along Oyster Creek in Sugarland and Missouri City, Texas.

“During Hurricane Harvey, in about a six- to eight-hour period, this area received roughly around 16 inches of rain in that short time period and there was just nowhere for that water to go,” Wright says.

The destruction was the result of the heavy and high flow of water from the creek, as well as runoff from the Brazos River. The surrounding ground area was saturated for nearly a month after the water went down. Because the banks were filled with water, they sloughed off into the bottom of the channel causing massive erosion. 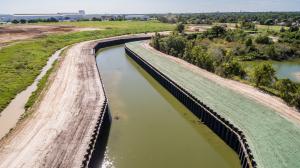 In describing just some of the repair and restoration work his team has been doing, Wright says his team drove steel sheet piling 20 to 30 ft deep to stabilize the ground. They also used riprap concrete blocks to prevent future erosion.

Regarding the various types of channel damage resulting from severe storms, Black says they typically vary in severity, but with Harvey, they saw them all.

“In some cases, there was just small toe erosion that maybe isn’t a huge problem at first but left unrepaired will continue to exacerbate. Then there were other areas where huge stretches of channels were eroded away all the way up to the tree line. We had cases like that which were repaired immediately after the storm and then we worked with NRCS and FEMA to get reimbursed.” 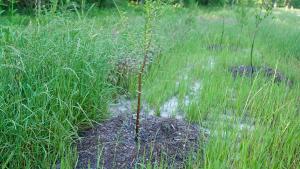 In terms of foliage repairs such as adding back grass in residential neighborhoods, Black says, “We tend to put back what we had before. Typically, that means Bermudagrass.” Bermudagrass is valued for excellent heat and drought tolerance, its capacity to withstand heavy use, and recuperate quickly.

“Sometimes we will put out wildflower seeding. That looks great to the community and helps for bees and things like that,” he says.

“I can’t speak ecologically, but it looks very nice and helps to stabilize the slope which is the thing that we’re most interested in.”

Wright says these efforts happen because of EWP working with a local partner, in this case the Harris County Flood District.

“We have a robust outreach effort with all of our communities across the county. This is a good example of that interaction—after construction was complete, the community came to us and asked if we could put some of the trees back into the area that had been taken out strictly for construction access and we said ‘absolutely’ and so it’s a good example of that interaction between EWP, the District, and the local community.”

“We like to keep the channels natural because that’s the way they are,” explains Harris County Representative, Marty Cristofaro. This is the reasoning behind limiting the use of concrete to meet regulatory standards and limit impact on local bugs and fish who call the channel home.

Cristofaro agrees that working with NRCS makes doing the heavy lifting needed to help areas hit by disasters like Hurricane Harvey much easier to navigate.

He says the Hurricane Harvey response is their biggest repair project to date.

“When Harvey came in, from the time we got engineers onto contract and built the job it was three years and about $85 million dollars. NRCS paid about 80 percent of that.”

“What I really like about NRCS is that I explain the need to them, and they say, ‘Okay, just make sure that you account for what repairs you did,’.” He says that NRCS keeps a database of the channels in Harris County, walking each one on a three-year rotation as well as after large storm events to take pictures while checking culverts and slope erosion.

Unlike FEMA, which requires a presidential declaration for disaster, NRCS can fund repair projects as soon as they can—it doesn’t require a federal or state disaster declaration to get funding.

“As the funding becomes available, we’re able to continue working with them and make those repairs,” explains Black. “I use this as my pitch to anyone that will listen, ‘Make sure that you know about the NRCS and that you fund them.’”

Black notes that NRCS assistance through EWP is dependent on funding available, explaining that as generous as they are with what they have, they can only provide support if the support is there to provide.

“We work with our local folks, and we work with our congressional delegation to make sure they’re aware that the NRCS does great work,” says Black. “They support the Harris County Flood District, and we support them as well. And so, as funding becomes available, we’re able to continue working with them and make those good repairs.”

Local landowners interested in helping to preserve natural resources are encouraged to reach out to their local NRCS offices. According to Duke, “NRCS field staff are present throughout the entire state of Texas and the United States. There are many different practices that are available to individual landowners that will help preserve the land for future generations.”

Individuals and communities should contact their local NRCS field office for more information about the EWP program and floodplain easements.