Bringing oysters back to Bissel Cove

To reverse the effects of overfishing and habitat change, the USDA Natural Resources Conservation Service (NRCS) is working with the Rhode Island Department of Environmental Management (DEM) to restore oyster reefs in protected water bodies like Bissel Cove in North Kingstown, RI, as part of the Rhode Island Oyster Restoration Initiative.

That’s why NRCS employees and a DEM contractor were out on Bissel Cove one chilly October day: to oversee the deployment of live oyster seed onto reefs made of cultch, which is a mass of empty shells to which the young oysters will attach themselves.

The deployment involves shellfish growers dumping containers of oysters overboard from their boats in designated places in the cove.

“Dumping oysters as part of an oyster restoration project.Each of the oyster growers -- and there are four or five oyster growers in this pond -- have their square or rectangular shaped plot, which is determined by the Rhode Island Department of Environmental Management,” explained Ghyllian Conley, Soil Conservationist for NRCS.

“Last week we deployed the cultch, which is just the dry, clean shell, to create the reef. And today we're out here with the growers deploying the live oysters,” said Conley. “They've been growing their stock of oysters on the side for us -- approximately 45 totes worth -- for the last few months and now they're on average over an inch.” 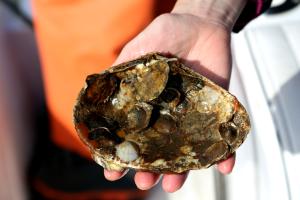 Jim Turenne, NRCS Assistant State Soil Scientist, explained that the oysters need substrate on which to grow. “It's either a hard bottom or rocky shoreline or, in this case, the reef that we're building,” said Turenne. “Without a substrate you're not going to get oysters or scallops to attach. So, that's what we're doing here.”

“The increased structure off the bottom provides good habitat for small fish, helps them avoid predation and provides a resource for them, as well,” said Patrick Barrett, Fisheries Specialist for the Atlantic States Marine Fisheries Commission, working under contract with the state DEM. “Hopefully with the concentrated effort of re-seeding and improving the habitat we can help restore the oyster population, as well as provide habitat for these fish.”