Gideon Nobbe worked with Indiana NRCS to build a high tunnel on his seven acre farm in Argos, Indiana

The first thing you have to know about Gideon Nobbe is that he doesn’t do anything small.

When Nobbe moved to Argos, Indiana to start his job with the Farm Service Agency (FSA) he decided it was also the perfect time to return to his farming roots. He and his family purchased seven acres and he immediately got to work transforming one of them into a produce farm. 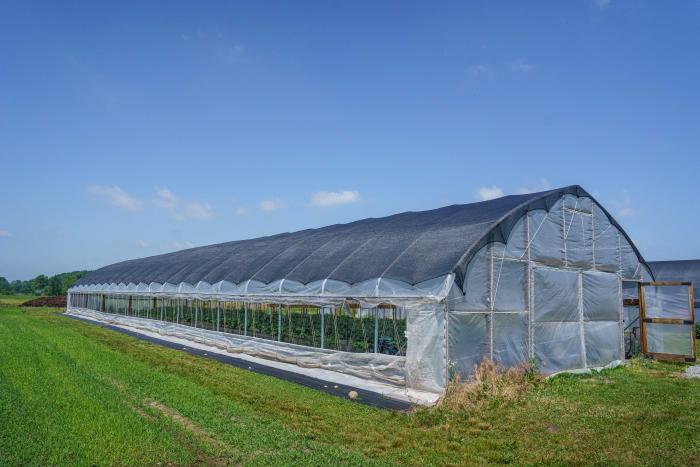 While a main purpose of the farm was to grow food for his own family, Nobbe chose to plant a full acre of produce because, having grown up in a large family, that was the size he was used to needing.

“I couldn't scale back because I didn't realize I needed to,” Nobbe said.

That first year he planted 150 tomato plants, 12 rows that included beans, corn and more and then when harvest time came, he realized it was way too much food for just his small family. In large part, because as he freely admits, “We really don't eat tomatoes that much.”

Faced with an abundance of produce and a family not yet big enough to make use of it all, Nobbe and his wife loaded up a wagon, placed it at the foot of their driveway and started selling it through the honor system.

The idea was simple. They took an old wagon, put a tarp over it to keep the rain off the produce, bolted an ammo box to it to accept payments and loaded it up with the extra produce, allowing people to come by 24/7 and purchase the produce they need. Each evening during harvest season Nobbe would go out, collect the money, cleanout the produce that wasn’t looking fresh and replenish it with offerings for the next day.

The honor wagon, as he calls it, has now been in operation for nearly a decade and has served as the lifeblood of the farm as it has grown from the initial acre to now encompassing much of their seven acres. Through it he sells produce harvested on the farm, extra plants that he started in his greenhouse, and flowers such as mums.

While little about the honor wagon has changed in the past nine years, Nobbe Farms itself has gone through a major transformation. From that original one-acre plot, Nobbe has expanded his operation into a full-scale commercial farm.
One of the biggest transformation points occurred in 2018 when Nobbe applied for the Environmental Quality Incentives Program (EQIP) through USDA’s Natural Resources Conservation Service (NRCS). Through EQIP Nobbe received technical assistance to plan for the construction of a high tunnel on his property and financial assistance to build one. 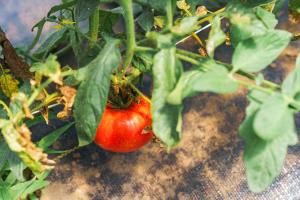 Through EQIP, NRCS typically pays for about 50% of the costs to construct a 70-foot-by-30-foot high tunnel that creates 2,100 square feet of growing space. Nobbe could not help himself, though, and used the EQIP funding to help offset the cost of building a 30’by 120’ high tunnel instead. He also received additional cost-share assistance from NRCS because he qualified as a beginning farmer*.

After adding the high tunnel to his operation Nobbe was able to extend his growing season by about a month and half on each side. In a normal year, he can now plant his first crops into the ground on April 1, while the frost-free date in his area is May 15, and keep crops growing into the middle of November instead of losing them to the first frost in October.

Along with tomatoes, Nobbe grows cucumbers, peppers, beans, squashes, potatoes, watermelon, pumpkins and in some years, he’ll add in strawberries. He supplements the produce business by growing mums and other flowers he sells through the honor wagon and local farmers’ market. 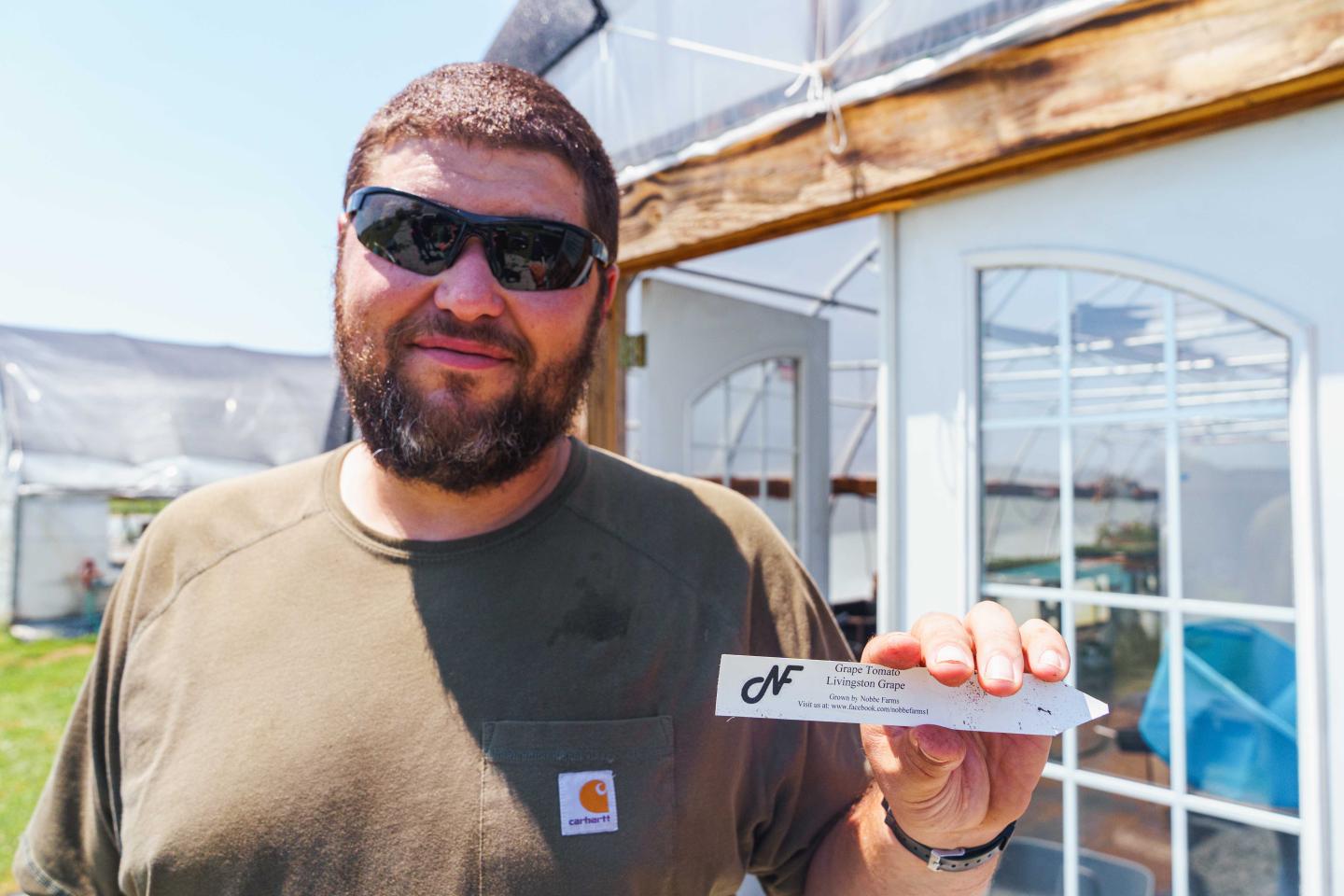 Once the greenhouse enabled him to fully realize the season expansion potential of the high tunnel, Nobbe reached back out to NRCS and applied to have a second high tunnel built on his farm. His application was accepted in 2020 and the second high tunnel was built in 2021. Much like the first time, Nobbe utilized the financial assistance from NRCS to partially pay for a much larger high tunnel than called for in the contract.

With the additional growing space, Nobbe has been able to lean fully into his mad scientist tendencies and begin experimenting with different techniques and processes in order to find the best methods.

“If it doesn't work this year, you can always try it again next,” Nobbe said of his mentality. “If I need to take and literally gut out something and redo because it's not working, I can do that.” 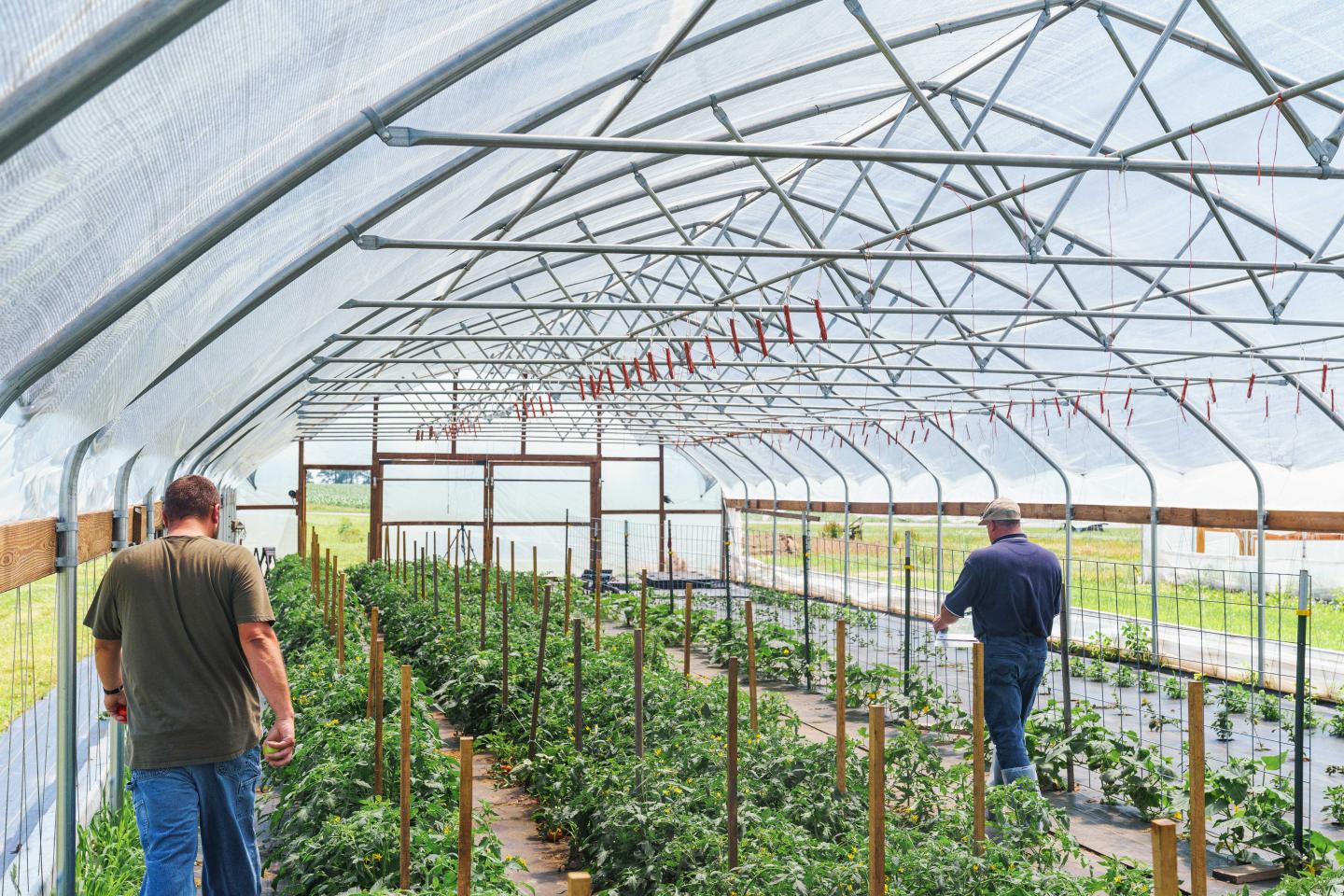 One of the benefits of a high tunnel is that they shield plants from harmful or erratic whether, but it also creates a desert-like effect because rain also doesn’t reach the plants. Water retention can then become a problem as the plants are fully dependent on manual water systems. After one season of plating cover crops before his cash crop, Nobbe said he has already seen a drastic improvement in the water retention capabilities of the soil inside the tunnels.

“I actually had not watered the cucumbers in week and a half and I was out pulling weeds in it ... and it was still moist soil,” Nobbe said of a recent experience. “I've never had that before. I think the root structure actually made it so that it's actually holding more water in that area.”

For his initial cover crop planting Nobbe decided to go with cereal rye because it had a late enough plant-by date that he could incorporate it while letting his cash crops grow well into November. During the winter, the cover crop stand was able to cycle water so effectively that he noticed it actually raining from time to time inside the tunnel as the cereal rye pulled residual water out of the soil, allowed it to condensate and rain back down to water itself.

The cover crop stand also helped to reduce the weeds in the tunnel and to cycle the nutrients to create an overall better soil health system when he planted in the spring. His plan for the upcoming winter is to try incorporating a wider mix of cover crops to see if he can increase the positive benefits he is already finding.

All in all, Nobbe said the impact of the two tunnels has been “massive” and were projects that he could not have completed on his own with NRCS’s assistance. After seeing the success on his own farm, Nobbe has also worked to spread the word to other local farmers at the market and allowed those interested to come visit his farm and learn more about the high tunnels.

To learn more about how a high tunnel could help your operation visit https://youtu.be/UMy5YWf2hok.

*When applying for NRCS programs farmers with less than 10 years of experience can qualify for higher payment rates and advanced payment options to help offset the costs of implementing conservation practices. They also receive priority consideration for targeted funds. You can learn more about the assistance available to beginning farmers at Farmers.gov/beginning-farmers.