Barbed wire fences changed the prairies forever and changed the environment for sage-grouse, which got along just fine without them. Historically, the behavior of sage-grouse and other sagebrush obligate species was shaped by the vast wide-open landscape in which they lived.

It was a landscape nearly devoid of any vertical structures with the exception of the ubiquitous low-to-the-ground sagebrush and the occasional lone cottonwood tree.

Prior to fences, sage-grouse flight behavior was also shaped by the vast open plains. Historically, there were no vertical obstacles protruding above the sagebrush, allowing grouse to fly just above the shrub canopy without confronting a fence. For whatever reason, sage-grouse have not displayed much adaptability to the changes taking place in their habitat including construction of fences. Another explanation for fence collisions suggests that the large size of sage-grouse, largest grouse in North America, makes maneuvering to avoid a fence, even when detected, difficult. High wing-loading has an effect on the grouse’s climb rate and limited maneuverability narrows the margin of error. Those familiar with the bird often refer to them as “B-52 bombers”, satirically comparing them to the large military cargo planes.

Fences are an important management tool, even though they present some problems for sage-grouse. Fences are often used to assure the proper amount of rest for rangeland plants grazed by livestock, but should not be installed without forethought. Not all fences are bad for sage-grouse. However, some fence locations can be problematic. In the case of rangeland fences and wildlife, more is not better and the minimum fencing required to manage range plants is best.

The Sutton Avian Research Center in Oklahoma tracked 850 radio-tagged lesser prairie-chickens through December 2004 in Oklahoma and New Mexico. Researchers were able to determine the cause of death for 260 birds. Interestingly, 39.8 percent of the mortalities were attributed to fence collisions in Oklahoma and 26 percent in New Mexico. New Mexico had a significantly lower fence density than Oklahoma and the researchers reported that hens were twice as susceptible to fence collisions as cocks, resulting in a disproportionate impact on population growth for this species. This is not to suggest that sage-grouse are as susceptible to fence collisions as lesser prairie-chickens which have a propensity to fly even lower than sage-grouse. But it is something to be aware of and keep on the radar screen as one of the many issues facing sage-grouse.

At this point, there is not as much information regarding sage-grouse and fences as other grouse species. Known sage-grouse-fence interactions include one barbed wire fence in Utah winter habitat that killed at least 36 sage-grouse the first winter after installation and a similar two-mile length of fence where 21 sage-grouse were killed in Wyoming.

Sutton Avian Research Center has found that marking fences to increase visibility reduces lesser prairie-chicken mortality. Researchers there marked over 100 miles of fence, one-third located in areas in which there were frequent collisions during previous years. They subsequently have not had a single collision along a marked fence.

The list below provides some special considerations for fences in sage-grouse habitat:

Considerations in the selection of fence tags should include: expense, durability, ease of attachment, and effectiveness of the product. Strong winds can pose an amazing challenge when attaching or hanging anything in the open range. Large tags or markers can be unsightly or can draw enough interest to make them a target to shoot.

Feathers on barbed wire (circled) indicate
where the sage-grouse struck this fence. 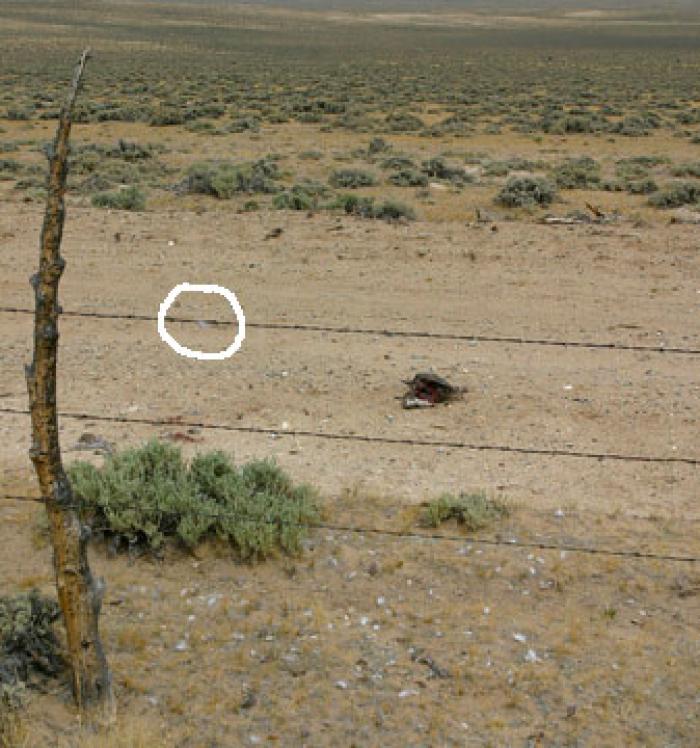