Sam St. Clair has worked with NRCS in Indiana over more than 30 years to rehabilitate and transform the forestland surrounding his house

As he spent years driving through Kosciusko and Whitley counties in Indiana as a district conservationist for USDA’s Natural Resources Conservation Service (NRCS) Sam St. Clair started to build a list.

He and his wife Sara’s long-term goal was to buy property and build a house, so St. Clair always had his eyes out for the right plot of land. He wanted woods they could use for timber production and recreation, a windbreak to shield the house and an area where he could build a nice pond. When he found a property that met his criteria, he’d add it to the list so he’d remember when the time came. 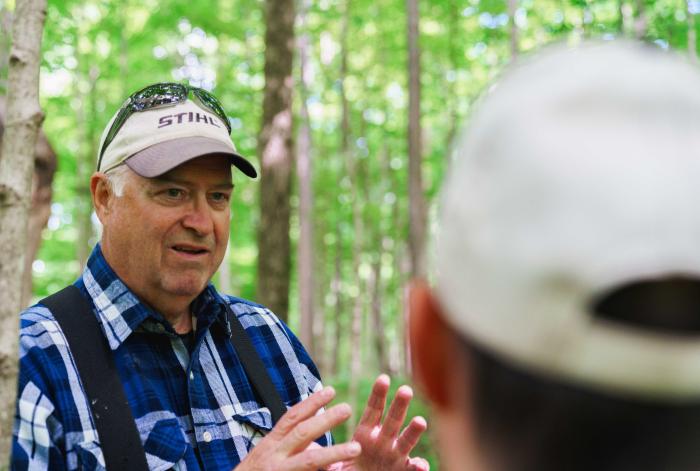 By 1990, when they decided to start the process in earnest, his list had stretched to eight or nine different properties and he began visiting the owners to see if anyone was interested in selling.

“I found out that it's pretty difficult to buy something that's not for sale,” St. Clair said.

The first five landowners turned him down, but with his sixth visit he found one willing to listen. The owner was looking to sell some of his land and the plot on St. Clair’s list was one of the parcels he was willing to part with. The same deficiencies that made it troublesome as farmland were attractive to St. Clair who had a different vision for the future of the land, so he pooled resources with a neighbor and together they purchased 67 acres located in Whitley County.

“He didn't care much for woods and part of this place was wet where he couldn't really farm it very well. That's where I built the big pond,” St. Clair said. “Then other parts of it were rolling so it wasn't real desirable for him.”

Soon after purchasing the property St. Clair relied on his years of experience working for NRCS to begin transforming it. The woods at the back of the property had undergone a high-grade harvest about 15-years before, leaving them decimated with no follow-up care.

“They allowed the buyer to take any tree that he wanted over 12 inches in diameter. Which is not a way to conduct a timber sale,” St. Clair said.

He immediately started implementing a forest stand improvement plan on the land to create openings, remove invasive species and promote growth of desired trees such as oak, walnut, cherry and tulip poplar instead of the beech, maple, hickory and elm that had started to dominate the landscape.

At the front of the property St. Clair turned part of the hayfield into woods through a tree planting consisting of desired hardwoods and pine trees to help promote their growth. The remainder of the hayfield was then transformed into a homestead and a nine-acre pond spread across his and his neighbor’s properties.

After making the initial improvements and giving them time to take hold, St. Clair turned to NRCS for help in 2002 to make further improvements. He enrolled his land in a contract through NRCS’ Environmental Quality Incentives Program (EQIP) to complete additional forest stand improvement on the woods and also develop wildlife habitat. 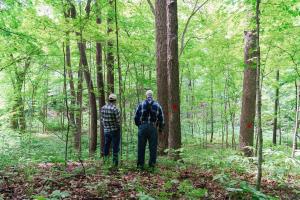 About 10 years ago, St. Clair and his wife decided to expand the area they now call St. Clair Tree Farm and they purchased 30 additional acres on the east side of the existing property. Much like when he bought the original plot, St. Clair immediately set to work improving it and despite having retired from NRCS in 2013, he once again turned to them for help. He enrolled the land in a 2014 EQIP contract, which helped offset the costs as he conducted forest stand improvements on both the original plot and the newly acquired one. EQIP also helped him conduct brush management on both properties to remove invasive species such as Asian bush honeysuckle and autumn olive.

By conducting forest stand improvements over the years on his land, St. Clair has been able to increase both his recreational enjoyment of the land and the value of the woods by creating a healthier stand dominated by more desirable trees. The work has included combating invasives and creating forest openings where sun-loving trees such as oaks and walnuts can survive. As the make-up of the forest changed and different areas featured diverse growth stages, an abundance of wildlife returned to the area, St. Clair said.

A few years after the St. Clairs purchased the 30 acres adjacent to their tree farm, they also acquired 200 acres called the Briar Patch located across the street. The property included multiple forest stands, including a 65-acre woods St. Clair calls the “old-growth woods” that was dominated by mature beech and maple trees. The property also included 80 acres of farmland, which St. Clair initially rented out to a farmer to row crop. 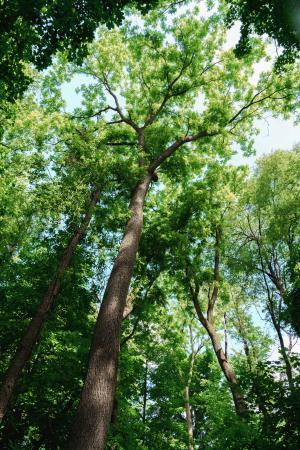 The old growth woods had undergone very little management in the past  St. Clair said, and many of the older trees had reached the end of their life span and were hollow at their base. After purchasing the land, St. Clair enrolled the acres in the Conservation Stewardship Program (CSP) through NRCS which helps landowners build upon existing conservation work. St. Clair received an annual payment through CSP from 2017-2021 along with additional funding to implement forest stand improvement practices following the completion of his 2014 EQIP contract.

St. Clair was able to us the CSP funds to hire a private forester to help him address a variety of issues in the woods. They started by killing many of the small maple that had started to grow and then planted about 1,200 oaks and black walnuts in various openings. They are also planning a conversation-minded harvest to remove some of the large maple and beech trees before they hollow out and lose their value.

“It's got a pretty large dam on it and over the years, several things had happened,” St. Clair said. “One is that through wave action and muskrat damage, the pond had eaten back about 10 feet in the center of it, to where it was getting to the point where it might have threatened to breach.”

The CSP fishpond management payment helped St. Clair rebuild the dam while also introducing herbicides and grass carp to the pond in order to combat weeds that had grown throughout it that were stunting the growth of the blue gills and degrading the overall quality of the pond. They removed invasive species from along the banks and planted the side bordered by forest with native pollinator plantings. 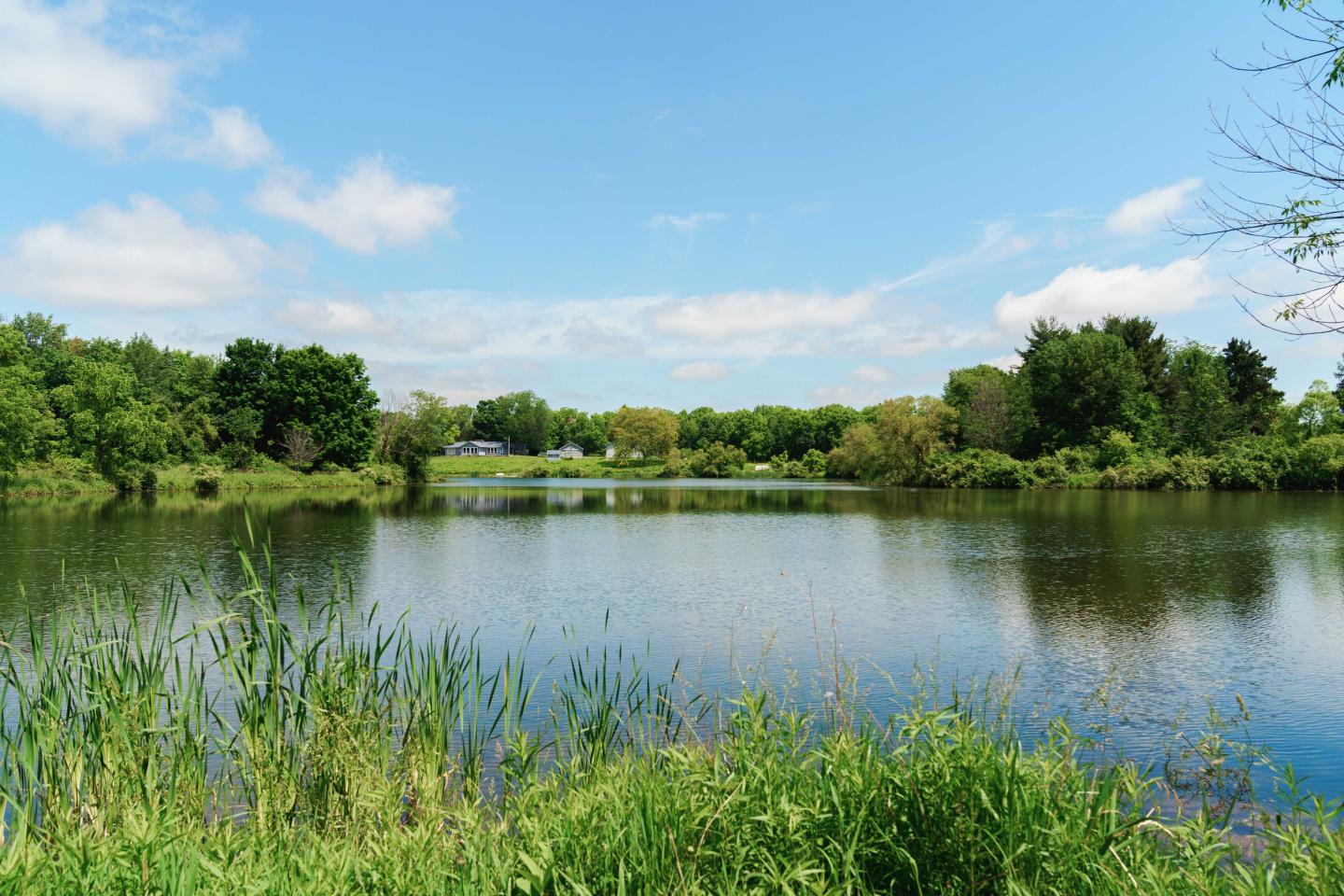 St. Clair also worked with USDA to enroll the 80 acres of farmland in the Conservation Reserve Program (CRP) which combines technical assistance from NRCS with financial assistance from USDA’s Farm Service Agency (FSA). Through CRP St. Clair receives an annual rental payment on the 80 aces in return for converting them from farmland into a native prairie. The prairie creates additional wildlife habitat on his property with the added benefit of the CRP annual rental payment to help offset his overhead costs and property taxes which enables him to do needed conservation work on the rest of his property, St. Clair said.

After 20 years of program implementation on his property, St. Clair said the landscape has been transformed. The initial woods have gone from decimated to flourishing and the newer parts of the property are making incremental improvements.

His work is not done. He reenrolled his land into a CSP contract that took effect in 2022 and provides assistance through 2026. He also has plans to enroll at least the Briar Patch portion of the property into a conservation easement to ensure it remains undeveloped for generations to come.

For more information about enrolling your land in EQIP, CSP or CRP reach out to your local district conservationist listed at Farmers.gov/service-locator.

The Conservation Stewardship Program (CSP) helps you build on your existing conservation efforts while strengthening your operation.

Forests and woodlots are constantly changing. To get the most out of your property to meet your wildlife, recreational, aesthetic or economic goals, some type of regular management will be necessary. Fortunately, there are many resources available to help you.