The Halfmanns: A Breed Apart

Chad and Cody Halfmann know what it means to initiate, innovate and implement at Halfmann Land and Livestock in Miles, Texas. NRCS has worked with them to achieve their goals, as well as plan for the future.

Even when he’s discussing the bigger picture, it’s easy to tell Chad Halfmann is someone who loves to get into the details.

“I’m really passionate about soil and soil health. When I say soil health, I’m talking about restoring our soils back to the way God made them over millions of years. Plants and animals growing and decaying, growing, and decaying, building up layers of organic matter that was alive before the introduction of the steel horizontal sweep and tillage.”

Chad says the overarching goal at Halfmann Land & Livestock is “mimicking mother nature with the resources and knowledge that we have from research, and no-till and strip-till and to reestablish those kinds of soil standards.” 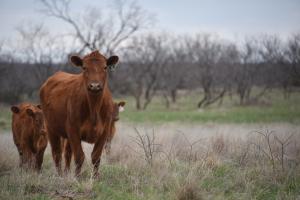 Chad runs Halfmann Ranch with his brother, Cody. True to his detail-focused nature (and degree in Industrial Technology), Chad handles the technology the brothers are implementing on the ranch to impressive results. Describing his job, Chad says, “if it has an electron, I do it.”

Cody, meanwhile, has a master’s degree in Finance, and handles the general operations of the ranch with a major focus on the Halfmann signature red angus cattle herd. After working at an accounting firm, in 2006, he felt his passion pulling him back to the ranch that’s been a major part of the family’s heritage.

“My father’s been farming this area since 1975,” says Cody. The family has been farming and ranching in the U.S. since the 1880s. Their legacy is important to Cody, who knows their story both before and after they took up cattle ranching.

Farming and Ranching is Literally in the Name

“Our family migrated from Germany, and we’ve been here since the 1880s. We can actually trace our name back in Germany to 1725. The name Halfmann can be traced to three daughters not having an older brother to pass the land to, so someone married the oldest daughter and took on the name “Half-mann” for half the land.”

Before the brothers began taking over operations at the ranch, they decided they wanted to gain experience and study new practices in an environment similar to their own in Miles, Texas. That journey took them to the other side of the world.

“I was really fortunate fourteen years ago to spend half a year in Australia,” says Chad, “with a family very similar to ours. Very focused on conservation.”

Chad started working with the family’s seed company, focused on plant breeding sorghum, millets, and the like. But while doing that, he also got a front-row seat to the family’s innovative planting strategies.

“They were already well-seasoned in no-till practices, but what was even more mind-blowing to me was that they were planting legumes such as lablab and chickpeas as a cover crop,” says Chad. “I thought they were just planting them as something to graze.”

“Coming back, I told my dad and my brother about how great these conservation practices are, and how well they worked for them. Their climate is very similar to ours in west Texas. Dad said, ‘okay, you’ve made a great case, let’s go ahead and try it.’” 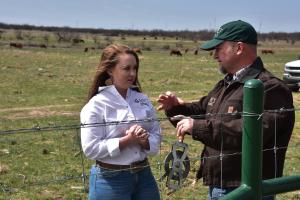 Cody briefly joined his brother in the Land Down Under, but also spent time at farms and ranches in Germany, Costa Rica, and Panama. In addition to what he learned traveling domestically, Cody brought those experiences to bear in running the Halfmann’s business operations.

Bringing These Practices to New Lands

The Halfmanns introduced no-till and strip-till methods to their ranch and have used cover crops as an alternative method of weed control. They’ve been pleased with the results, and they have the data to back that up.

Every year, the Halfmanns run advanced soil tests to analyze the available and deficient nutrients on their land. Gathering this data not just for every individual season, but for year after year after year.

This data allows them to better rotate their crops and grazing, as well as help them accurately allocate expensive fertilizer and seed. As a bonus, this helps the brothers with carbon sequestration, and makes for healthier crops.

The brothers’ success with these methods has not gone unnoticed.

“The Halfmann's embrace technology,” says Wade Day, a 12-year veteran of the Natural Resources Conservation Service (NRCS) and the District Conservationist who works closely with the family.

Day, assessing the overall work the Halfmann’s do from a resource management perspective, offers high praise: “They think about the land first in everything they do. They’re good stewards of the land.”

NRCS has helped the Halfmann’s with several projects on both the farming and ranching side of their operations.

“Just myself,” Day says, “I’ve worked with terraces and engineering designs, but also pipelines and general knowledge that they’re looking for.” They’ve also received help with water troughs and cross-fencing.

The NRCS continues to work with the brothers as their innovative techniques and practices show no signs of stopping.

Taking the Bull by the Genes

Innovative techniques go beyond crops for the brothers, who breed and raise a herd of Red Angus cattle. From one bull in 1964, Halfmann Red Angus has become, “one of our key components,” according to Cody. With that herd, they are constantly working to produce better results for the animals and their operation.

“A few years ago, we switched over from a hot brand to freeze branding,” says Cody. “The animals don’t mind the freeze branding as much.” They use a combination of alcohol and dry ice which kills the pigmentation in the cows’ hair, causing it to grow back white and bright in the shape of the brand.

They also use some pretty advanced technology to track the genetics of their cattle. The Halfmann’s take a tissue sample from each animal they tag. The DNA from that sample is entered into a database they use to improve their breeding practices. Each sample can identify key traits a cow would pass on to up to twenty calves.

Using these technological advancements with their cattle, help Halfmann Land and Livestock improve and guarantee the genetics they are selling their customers when commercial cattleman bid on seedstock cattle and bulls.

“We sell seedstock cattle and bulls to commercial cattlemen. Anytime we can help increase the accuracy and the predictions of what those animals are going to produce, that’s going to benefit our customers which will ultimately benefit us,” Cody explains. 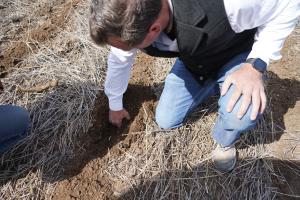 All in a Day’s Work

In addition to other high-tech tools like ultrasounds to gauge ribeye marbling, the Halfmann’s are using cutting-edge systems to do something their family has done for generations: restore and respect the land they work.

Glen Halfmann, Cody and Chad’s dad, continues to help around Halfmann Land and Livestock. He encourages Chad and Cody to evolve not only with the land but with new technologies and is their biggest cheerleader when they come up with a new and innovative idea for conservation practices. Their hope is to work with the land to make sure they aren’t stripping the natural nutrients ultimately allowing them to pass the family tradition down to their kids and grandkids.

“They’ve got a lot on their plate, but at the same time they’re treating everything correctly,” Day concludes. “That’s nice to have when you’re working with someone: that they’ve really got the best intentions in mind.”

Chad is hopeful when it comes to the future of Halfmann Land and Livestock. “In the next 10, 30, 50, 100 years [we will be] in a sustainable model; in a very successive fashion that we can hand to our next generation. Where we nurture and educate our children to take this over and to understand that sustainability starts with conservation.”