When it comes to land management, Jeremy Brown, owner of Broadview Agriculture Inc. has a clear vision of what he hopes to accomplish that stretches well beyond his family’s 5,000-acre farm Dawson County, near Lamesa, Texas.

When it comes to land management, Jeremy Brown, owner of Broadview Agriculture Inc. has a clear vision of what he hopes to accomplish that stretches well beyond his family’s 5,000-acre farm Dawson County, near Lamesa, Texas.

“I don’t ever want to be a farmer who thinks he’s figured it out,” he says, standing tall among rows of young, newly planted cotton. “The person who created this is so much bigger than me. And I’m constantly trying to learn how He created it, how it functions, and what I can do to work alongside it.”

A fourth-generation farmer, Brown grew up working the land with his grandad and his father but says that the way that he farms today is 100 percent opposite of the way they farmed back then.

These days, he is more focused on conservation planning than on turning around crop after crop. Over the years, he’s worked closely with the USDA Natural Resources Conservation Service (NRCS) to use multiple regenerative farming practices to raise cotton.

“The NRCS has been a valued resource for me and my operation, both locally and nationally. There’s just so much good information out there that can help us farmers to grow and to learn.” 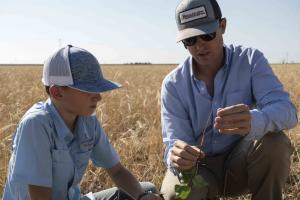 Married now with four beautiful children, Brown shares that his son and three daughters work out in the field with him quite often.

“One of the things I love about production agriculture is that it’s a family business. He says he hopes to teach his children about the importance of stewardship.

Brown is introspective and reflective in everything he does. Even the name, Broadview, was carefully chosen for a good reason.

“We named it Broadview for multiple reasons. As you can see, the view is very broad, but we also did that because we wanted to have a broad perspective on the way that we farm. We don’t want to be closed minded on ‘this is the way it’s always been done’ or ‘this is the only thing that grows here’ and so we try to have a very broad perspective in the things that we do and the crops that we grow.”

Getting to the Root of an Organic Farming Operation

Although organic certified cotton and non-organic cotton is the family’s main crop, they also grow wheat, grain sorghum, and sesame. Brown explains they grow other crops to heal the land and bring rotation and diversity based on soil health principles that include limiting your disturbance, diversity, animal integration, always having a root in the soil, and maintaining cover.

In 2013, Brown says he started reading the importance of Hairy Vetch, a cover crop that helps protect the soil from erosion, helps improve soil tilth, and provides weed control. The discovery opened his mind to an entirely new way of farming. 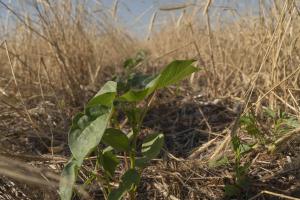 “I’m a big believer in cover crops,” he says. “When we first started doing it, we were mainly growing winter wheat to keep the wind from blowing [and causing] erosion.” Brown believes that having cover crops is the only way for his operation to remain sustainable into the future.

“Our goal is always to have a grass, a legume and a brassica if we can,” he says. “Timing challenges and lack of rain plays into it, but that’s our goal.”

Brown understands why some farmers are hesitant to try more conservative farming practices, with a desire to find that “quick fix,” solution instead, but he says restorative farming and growing cover crops is a five-year commitment, if not longer, to restore health and bring life back to the soil. “We use the cover crop to always have something growing to feed those microbes, bacteria and fungi. All the things we can’t see that need to live and root to survive.”

“I’m really passionate about that and I’m seeing the benefits of that.”

Quoting ecologist Allan Savory, Brown shares, “’Where we farm, it’s a brittle environment,’ and so sometimes, as much as you want to do all these things, you need those timely rains to help you and so you just gotta be flexible and understand that sometimes you’ll have some failure with that, and you’ll have to go to ‘all right what’s next?’”

Brown says that when the rain comes in the southern part of the Great Plains, it comes heavy, the evaporation rate is often higher than rainfall amount, and the area can be very windy.

One way he tries to work with and make the most of what nature gives him, good or bad, is to always have seed available, “And if there’s a timely rain, we’re gonna plant something if there’s nothing growing on that piece of land.”

“We believe so passionately about having that living root and having diversity into the soil. We used to just be so monoculture and I just want as much diversity as we can. And so yeah, it’s a goal of ours that sometimes we achieve it and sometimes we don’t.”

“It’s a challenge and so that’s were resources like NRCS are really helpful.”

A Mutual Partnership in Technology and Knowledge

“[Jeremy] was the one that kind of started the relationship by coming in the office and asking for some assistance and looking at different things he was looking at doing. We just kind of blossomed working with him from that point on through different practices and ideas,” says Rogers.

“We learned a lot from each other moving into this new era of soil health.”

Since discovering what the NRCS can help with, Brown has been quick to partner with them on a variety of conservation-based projects.

“We’ve worked in many facets with Jeremy. We’re standing in a field of grass that we helped him in seeding, using different programs, including just grass planting and also pollinator habitat to try and help his organic operation.” Rogers says, while standing in a large field of mixed grasses, flowers, and other beneficial plants. 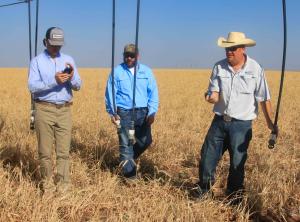 Where Brown’s conventional till cropland is concerned, Rogers says the NRCS has worked closely with Brown by working to make his pivots more efficient and trying to utilize what irrigation water that is available in a more efficient way to benefit his crops and try to save as much water as they possibly can.

“That’s been his goal – utilizing the newest technology and the best system to try to do that.”

Underwood explains that while it’s been gaining popularity across the United States, using mixed species cover crops—which consists of varying grasses, forbs, and legumes together—is a unique idea for this part of the world.

“Jeremy has been implementing this practice on his farm over the last several years with good success,” he says pointing to the vast field behind him which is covered by a small grain crop that he says Brown plants on an annual basis to improve soil health, increase soil organic matter, and help control erosion.

“Wind erosion is a major resource concern for the High Plains of Texas, and the farmers have to manage that quite diligently. Right here, we have an excellent example of one very successful farmer managing his wind erosion quite well.”

Brown takes his role as a steward of the land seriously, making time to share what he knows and what he’s learned with other farmers interested in regenerative farming practices.

“I think it’s important that we’re actively involved in organization in the community. As a farmer, we’ve stirred a lot of land and I believe that our business is one of the foundational life bloods of our area,” says Brown.

Brown is the President of the Dawson County Farm Bureau, serves on the Executive Committee of the area’s Plains Cotton Growers—a non-profit producer organization composed of cotton growers from the Texas High Plains—and even serves on the board of the Agriculture Texas Farm Credit and Texas Organic Marketing Cooperative.

“Sometimes I think I need to learn to say no,” jokes Brown, “But to me, if I can add any input to help myself or other farmers, that’s what I’m there to serve. It’s not about me it’s about the community.”

Rogers acknowledges that he often uses the knowledge that Brown has shared with him, bringing it into what he relays to other producers, “Because, not every place is the same and not everything works the same way here as it does somewhere else. So local knowledge is key to what we do in talking with producers and understanding that ‘yes, I know the science says that works in that area, but through experience, we’ve found this.’”

Because Brown is one of just a few farmers in the area who is implementing innovative and out-of-the-box practice like multi-species cover crops, he says he appreciates having the platforms to talk about the different things he is doing and the different ways he is doing them.

He gets a lot of calls in the winter because it looks like he’s growing a cabbage or lettuce, which then leads into and allows for an opportunity to talk with his neighbors about what he’s actually doing.

“I’m hoping over time the results will speak for themselves,” says Brown. “It’s a challenge, but it’s fun.”

The Future of Farming in Dawson County is Now

Underwood describes Brown and Broadview Agriculture as “the new generation of farmer.”

“Jeremy is an early adopter and he’s applying a lot of conservation practices. He has an education and he’s structured much more like a business, so to speak, says Underwood.

“He’s a family farm, but he’s developed a mission statement. Within that, he has specific conservation goals. Part of those goals is to be able to leave this land better than he found it. Therefore, if his children would like to continue to farm in the future, he realizes his responsibility to the land. I think also to the American public to support us with a safe and reliable source of food and fiber.”

“Jeremy has taken that responsibility very seriously and does a very good job with farming,” says Underwood.

NRCS has provided technical assistance in breaking out some Conservation Reserve Program methods into some of the property’s organic certified land that worked for both Brown and NRCS to conserve the natural habitat, according to Rogers.

To help Brown to become the best steward of the land that he can be, Rogers explains that NRCS is constantly providing him with technical information and studies to educate him about the science behind doing some of the techniques they recommend.

“We’re also learning from Brown on those aspects of what really works for a farmer and what doesn’t and trying to incorporate that into everything we do on a day-to-day basis,” says Rogers.

For Brown’s part, he remains excited to continue along a path focused on identifying and implementing ways of improving the resources on his land and the health of his operations well into the future.

“There’s nothing that I’d rather do than be a steward of the land. It’s one of my favorite things,” says Brown. “I find myself just wanting to grow and learn how we can manage what God has given us and hopefully leave it better than we found it.”