David and Anthony Albus are third generation farmers who have a goal to switch from conventional farming to limited-till farming on their operation on drylands in Hockley and Lamb Counties in Texas.

Albus Farms, in Hockley and Lamb counties on the Texas High Plains, is run by brothers, Anthony and David Albus. They’re both third-generation farmers who have a shared goal to switch from conventional farming to limited-till farming, to preserve the moisture in the soil, prevent sandstorms, and loss of soil and crops caused by drought and storms.

The brother’s farming careers stretch back to the early 1980s with David starting in 1981 and Anthony following suit in 1989. They joined forces in 1994 and have been farming together ever since.

While they mainly grow cotton as their primary cash crop, they also do cover crops, including wheat. In years where they’ve lost their cotton, they resorted to replanting using grain sorghum because it’s the best fit for dryland.

“We farm about 4,000 acres and it’s mostly dryland,” says Anthony. “As we started farming the dryland, the primary goal is to keep the rainfall you do get and make it count when you get it, so you have to be prepared for big rains. Most of our land we’ve put on a contour, and we’ve terraced over the years to control the water and keep it on the fields. It’s made our land more productive that way.”

The brothers credit a long and strong partnership of working with the USDA National Resources Conservation Service (NRCS) since the 1990s in helping them to consider and learn about new ways of farming. The latest big project being the installation of a new rainfall harvesting system, which allows them to capture and retain any rainfall. NRCS has also provided technical assistance with their terraces in the cropland fields.

“NRCS has been great. We never felt like they were insisting on regulations or procedures that were not beneficial,” says David. “It’s a good facility and good organization to have. They are for the benefit of the farmers.”

A Family History of Farming

According to David, their grandfather, Joe Albus, had moved up on the Plains from a small community in Knox County, Texas.

“He was one of five that drove Model Ts up the caprock and broke out land in Pep, Texas, which is about 10 miles west of here,” says David.

The Caprock Escapement forms a natural boundary line between the High Plains and the lower rolling plains of West Texas, stretching from the Panhandle into Central Texas. 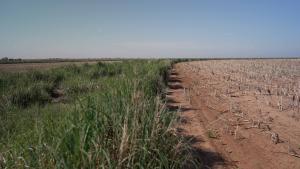 David indicates that it’s been easy to work with NRCS, having had a history with them for so many years and “Because we were farmers who would not only go out and say that we wanted terraces, but we built them. This really started with their parents and uncles who, David said, built a lot of terraces back in the 1940 and 1950s in an effort to keep water on the farm. “And we just continued that.”

“We decided, let’s make the soil make us more for our time spent on it,” says David. “So, the first thing we really got involved with was building terraces through the NRCS and that just led us down the road to maybe some no-till and maybe some conservation tillage.”

According to David, he and Anthony have placed several farms in the Conservation Reserve Program like the terraces. “We worked with NRCS and FSA on that because it was a challenge.”

NRCS Zone Engineer, Reed Poling, works out of the Lubbock Zone Office, and has helped the Albus brothers with a few of the projects they’ve applied for through USDA programs.

“I got involved with the Albus brothers last year when they came into the Hockley County Field Office,” says Poling.

Poling helped the brothers with four terrace systems that they wish to make as farmable as possible, noting that they are also open and willing to accommodate contour farming. He points out, “That’s to make sure we limit water erosion across the field as well as hold water rather than let it run all the way off the field. Any water we can save in West Texas and keep on the field is a good thing.” 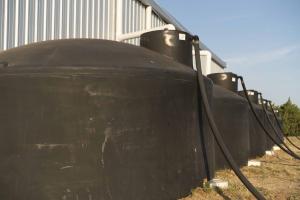 In 2020, David and Anthony applied for the Environmental Quality Incentives Program (EQIP) through NRCS to install a rainfall harvesting system on their barn. Installed last August, the system has a 40,000-gallon capacity.

“Consequently, working with NRCS and doing conservation work came hand in hand with farming dry land. We were beating our brains out trying to make crops out of the ground out here,” says Anthony.

“I’d been thinking for a few years that I needed to catch what’s coming off this barn,” he says of the structure that used to be a cotton gin and has since been added onto, many times over. David and Anthony had heard about rain catchment, using it for spray water for their crop fields and the benefits of that.

“I don’t think most farmers realize on a big barn how much water they can utilize. I think for this barn, for every inch it rains, we catch about 10,000 gallons of water and 10,000 gallons will spray a thousand acres for us.”

Poling explains that they set out eight tanks to hold the capacity coming from the barn roof. They needed two tanks placed in the front of the barn and six in the back based on how the water was going to flow off the roof. “We look at the separation of where the gutters are going to be and how that roof area is split, and those tanks are sized appropriately so all the rainfall runoff can be collected off the barn.”

All eight water tanks can hold 5,000 gallons each catching water from the roof being channeled through the gutters. The tanks were also designed with a level gauge that connects all tanks together. This allows them to empty out at an even pace despite height differences with the roof from the front of the structure to the back.

“When one of the tanks fills up faster than the others, over time they all equal out to the same level in the tanks. So then when we get ready to pull it out to spray our crops, we can pull it from one tank. It’s very handy and convenient,” says Anthony.

“I have to admit that it’s better than we thought,” says David. “I really thought we were going to have to treat the water but so far, it’s been good for us and being that it’s rainwater, it’s even purer than RO [reverse-osmosis] water. A lot of farmers put in RO units in an effort to get some of the minerals that are concentrating in our depleted Ogallala [Aquifer]. Lot of minerals are getting concentrated in that water, inhibiting the use of chemicals.”

Working together with the brothers was easy and enjoyable for Poling.

“Anthony was an agricultural engineer in his schooling, so we could throw back and forth design ideas,” adds Poling. “He really knew what I was talking about when I got to the design process and was great working with us on meetings.”

What’s on the Horizon for Albus Farms?

It’s clear the partnership between the brothers has been rich and fulfilling despite the hardships that come along with dryland farming.

“Sometimes you think, well, we’ve done a lot of things and eliminated the possibility of big wide farming, but what can we leave our children?” David questions.

As with any family-run business, they have learned to work together through it all, along with the help of NRCS not only to maintain the operation, but to sustain the land well into the future. 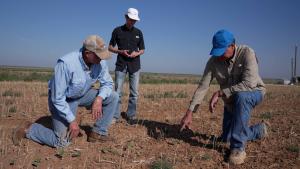 “Albus Farms has been great to work with,” says Poling. “They are producers who are not only looking at what’s going on now, but really looking toward the future of West Texas. They deal with a lot of situations out here with our irrigation problems, dryland, terracing.”

On working together with his brother for nearly 30 years to find solutions to these problems, David offers, “Anthony may have a different opinion, but I think it’s been beneficial for both of us. Two heads are better than one. And we may argue for 30 minutes, but in the end, we probably do what’s right because we’ve probably argued about every scenario.”

“I will go to the end of my farming career thinking that it was a good move for me, and I hope he feels the same way,” says David.

Anthony, too, is driven to continue to push himself and his brother toward a more sustainable and productive way of farming.

“Before we fully retire, we want to figure out a better minimal till system for dryland cotton and that’s what we’re working on now,” says Anthony.

His passion for design, new technology, and his curiosity and open mind to trying new things seems to be something he’s passed on to his son, Kevin, as well.

Kevin Albus was just recently hired on with the NRCS as a Soil Conservation Technician.

He talks about how working the farm as a kid was not his favorite thing to do, watching other kids having fun in the summer and going places. But he says it instilled a work ethic early on.

“And as I get older, I really enjoy it and see myself doing it someday,” he says. “I appreciate the work that they’ve always done for us, and I hope to do that for my own family one day.”

Kevin eventually hopes to partner his NRCS work with his work on the Albus’ farm. It’s been in the family for generations, and Kevin plans to keep it that way.

“I want to establish myself in the workforce now, but I do have full intentions of coming back one day. You don’t realize you love something until you get away from it, I guess.”

“[Albus farms] started with our parents and our uncles,” says David proudly. “I hope they’re looking down and they’re proud of what we’ve done.”