With its herd of Belted Galloway cattle often seen grazing in the shadow of the Newport Bridge, Windmist Farm is perhaps the most visible of Jamestown, Rhode Island farms. The town sits on Conanicut Island in Narragansett Bay, a stepping stone for tourists on their way to nearby Newport.

“We inherited the property in the early 2000s from my father-in-law, who bought it in the early 1960s,” explained Martha Neale, who operates Windmist Farm with her husband George, raising beef cattle, goats, sheep, pastured pork, and layer hens.

“We raise most of our own livestock and sell from the farm, at farmers markets and a little bit of wholesale,” said Martha. “We started raising Belted Galloway cattle in the early 90s because we liked the looks of them. People enjoy driving by and seeing the ‘Oreo cows’ on pasture, which we enjoy, too.”

In 2007, the 44-acre scenic parcel was preserved as farmland forever thanks to the efforts of the people of Jamestown, who floated a bond to help with the purchase, as well as the State of Rhode Island, the USDA Natural Resources Conservation Service (NRCS), the Champlin Foundation and The Nature Conservancy.

“Jamestown is a pretty wealthy community, so it certainly helps my business, but the community also feels very strongly about its conservation ethic,” said Martha.

“As a result of conserving the farm, we decided to really go into farming and fulfill my dream of being a farmer when I grew up. I was in my fifties by the time I really started farming,” said Martha. “Since then, we have been able to do a lot of conservation practices that we believe very strongly in.”

Martha explained that with Jamestown being on a sole source aquifer, they’re concerned about protecting the groundwater. The farm also borders a salt marsh. “We have to be very conscious of where our manure runoff goes,” said Martha.

With the help of NRCS, Windmist Farm has implemented conservation practices including a riparian buffer to protect the salt marsh, a rotational grazing system for livestock, reduced tillage, split nitrogen application, and pollinator habitat seeding. They have extended their season with a high tunnel and plan to install a second one.

Local arborists often give the Neales free wood chips, which they use for livestock bedding. “I can't tell you how great that's been,” said Martha. “In the wintertime, we can bed the cows down on the wood chips and that keeps them out of the mud.” The wood chips are composted to help sequester carbon in the soil. The Neales also have mobile chicken coops that allow the birds to be outside and spread their manure around the field. 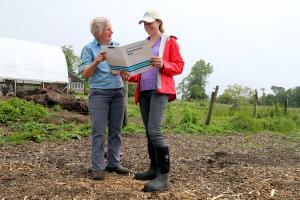 “I guess a lot of it is just not doing any harm and leaving the land so that it can go back to its natural cycle when we’re gone,” said Martha.

“We sell clean food. The cows are allowed to live their good cow life, as are the pigs and chickens and the sheep. To me that's the way we need to eat,” said Martha. “I always welcome people to walk around the farm. We're transparent, we're not hiding anything. Come see our animals and how we treat them, how we keep product.

“I think it's very important that they get an idea of what it takes to put it all in the freezer,” said Martha. “The only reason that we've been able to make this work is because I have built up a customer demand among people who are worried about where their food comes from.”