Dan Diaz, a no-till farmer and conservationist in Stephenson County, shares his story of switching to cover crops. Dan found that cover crops not only improved soil health, but also had a positive budget impact for his operation.

Dan Diaz lives in Lena, Illinois, a small rural community in picturesque Stephenson County. But Dan is a full-time plant manager at an industrial automation manufacturing plant located just south of Chicago. He spends his work week in Will County but spends weekends back home about 160 miles west. Although he works in the city, Dan and wife Kathy still enjoy rural life. In fact, Diaz owns 52 acres of farmland near Freeport, Illinois. All acres are highly erodible ground. Twenty-five are farmable but all of it is a beautiful, rolling landscape. Over the last 18 years Dan has restored this land into a tranquil getaway he calls his “sanity place.” 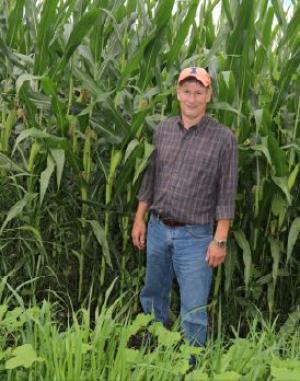 Diaz purchased the land—initially enrolled in CRP and a permanent pasture—back in 2000. Dan’s father and grandfather had both owned land, but not farmed and Kathy grew up on a working grain and dairy operation in Stockton, Illinois. While they both had land ownership and agriculture in their past, for Dan, these acres were meant for something special; something different.

Is Diaz a farmer? An outdoorsman? A wildlife enthusiast? A conservationist? Yes. In all his “spare time” Dan is enjoying this land, trying new things, and learning a lot.

Diaz knew a portion of the farm could still grow commodity crops, but he was concerned about how those crops would be grown. For the other acres, Dan wanted to diversify things. Just a bit. There were so many options. Dan wanted to do it all, but he needed to do it right. Kathy supported Dan and his diverse plan. “Her only requirement was that she’d never have to milk another cow,” Dan laughs.

Dan began his ownership, farming on halves with a neighbor who used a no-till corn and soybean rotation. The farm already had a history of no-till and Dan has maintained no-till on the operation for 18 years. But he has taken the conservation side of things even further. With all the recent talk about soil health, he wanted to try cover crops and conduct tests and experiments to see just what different plants would do to improve his soils and his crop yields. “I don’t have a lot of acres, but I had enough to try things out. I figured science could show me what works, what doesn’t, and I could learn by experimenting,” Dan says.

After working with other local cover crop enthusiasts, Dan joined ProHarvest Seeds as a sales representative (like he needed one more job, right?). This new alliance provided a way to try many different cover crop species, conduct small-scale on-farm research, and motivate others to try this ‘old fashioned’ technique with a 21st Century twist. He was later asked to join the NACD, National Association of Conservation Districts as a “Soil Health Champion” and then was later nominated to join the local Stephenson County Soil and Water Conservation District as an elected Director. These roles introduced Dan to a wealth of information, valuable farmer contacts, and conservation professionals.

“I drive across northern Illinois every week and see thousands of acres of farmland that is tilled and chiseled unnecessarily. I don’t see many cover crops being planted. My observations are that there doesn’t appear to be much use of these important conservation options. It concerns me,” Dan explains. He has seen cover cropping and soil health practices being adopted by small-scale producers but would like to see more widespread use of a proven technique that sequesters nutrients and enriches Illinois’ soils on a wider scale across the state. 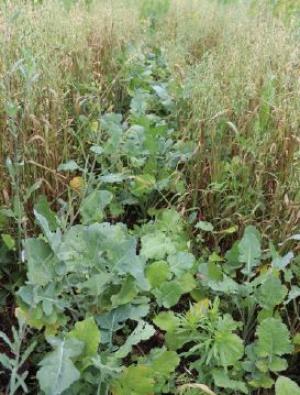 Dan Diaz doesn’t farm for a living. He doesn’t farm thousands or even hundreds of acres. But for the land he does own, he uses time-tested conservation practices that work. He’s joined forces with USDA’s Natural Resources Conservation Service (NRCS) to tap into two things: technical and financial assistance. Why? Because NRCS helps him make wise land decisions that secure his profitability and ensure that conservation indeed PAYS.

Recently the Diaz farm was part of a Conservation Innovation Grant project organized with the National Association of Conservation Districts (NACD) and NRCS. Dan documented and tracked his activities, inputs, expenses, and time invested with cover crops over a five-year period (2012 – 2016). The data, compiled and analyzed by DATUresearch, confirms cover crops had a positive budget impact on his operation.

While in the research process, Dan also signed up for NRCS’ Conservation Stewardship Program (CSP). The program paid him a stipend to experiment with different crops and open up his land for field days so other local farmers and landowners could see how they look and how they work first-hand.

According to Dan, “I still couldn’t believe the number of worms that found their way to my fields once I added cover crops. Amazing!” Diaz also leaves old timber where it falls to create natural areas for local deer and wildlife. He’s also got a small spot where he’s growing popcorn. Basically, Dan’s got a place for nearly everybody on his little piece of Planet Earth. Other practices sprinkled across Diaz’s 52 acres include:

These days, Dan enjoys offering his fields, data, and research to teach other farmers the benefits conservation offers on any scale—large or small. Field days are a great way to show others what works here in northern Illinois and what the practice and plantings will look like. Pollinator acres are full of Monarch Butterflies. Song birds are back, deer and wild turkey regularly use his food plots, and his corn is approaching 9’ tall.

“I’m working hard to do things right. I’ve created a sustainable environment that combines ag production with wildlife. The incentive programs help me keep it profitable and nature and science keep it all healthy. Plus, I’m in very northern Illinois and am using cover crops successfully,” Diaz smiles.

Dan’s son recently graduated from the University of Illinois with a degree in Environmental Science.  No doubt exposure to Dad’s farm landscapes and ecosystems played a role in developing his interest and commitment to whatever future career he pursues.

“Am I a farmer or an Engineer? I’m both. In both environments, I’m building something special, something awesome. But I have to admit…the long strolls I take at the farm are much quieter than those at the plant.”

To learn more about how NRCS can help you address resource concerns on your land, visit the Illinois NRCS Homepage. 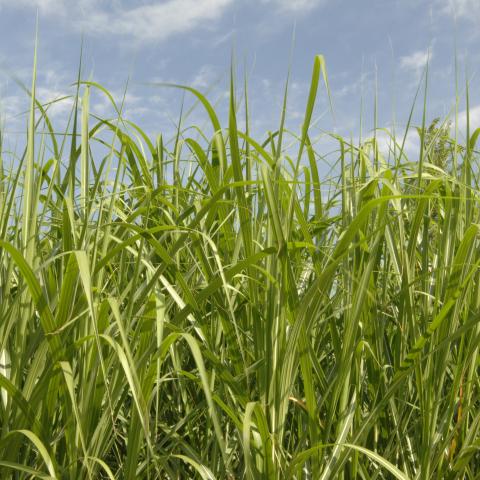 Farming With Conservation In Mind